Changing Concepts of Contract: Essays in Honour of Iain Macneil 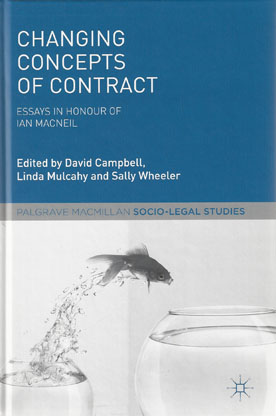 Changing Concepts of Contract is a prestigious collection of essays that re-examines the remarkable contributions of Ian Macneil to the study of contract law and contracting behaviour. Ian Macneil, who taught at Cornell University, the University of Virginia and, latterly, at Northwestern University, was the principal architect of relational contract theory, an approach that sought to direct attention to the context in which contracts are made.

In this collection, nine leading UK contract law scholars re-consider Macneil's work and examine his theories in light of new social and technological circumstances. In doing so, they reveal relational contract theory to be a pertinent and insightful framework for the study and practice of the subject, one that presents a powerful challenge to the limits of orthodox contract law scholarship.

In tandem with his academic life, Ian Macneil was also the 46th Chief of the Clan Macneil. Included in this volume is a Preface by his son Rory Macneil, the 47th Chief, who reflects on the influences on his father's thinking of those experiences outside academia. The collection also includes a Foreword by Stewart Macaulay, Malcolm Pitman Sharp Hilldale Professor Emeritus at the University of Wisconsin-Madison, and an Introduction by Jay M Feinman, Distinguished Professor of Law at Rutgers School of Law.