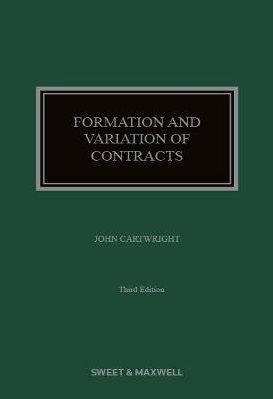 The book traces the continuing development of the rules, as a response to changes within the English law of contract and to learn from developments being made in other legal systems and highlights areas of contract law where there is likely to be significant debate about possible development in the coming years. It also provides a perspective on the rules for the formation of contracts from an international and comparative dimension.

Part I is devoted to pre-contractual negotiations (including remedies where negotiations fail to reach agreement) and finding the agreement through offer and acceptance; Part II is devoted to formalities, both in general and in contract in particular, including contracts for the sale of land, consumer contracts, contracts of guarantee and deeds; Part III is devoted to the requirement of consideration (which gives contract its character as a ‘bargain’ in the common law), both in the formation of a contract, and in the variation of an existing contract; Part IV is devoted to promissory estoppel, both its traditional role in the modification of a contract and its potential to develop in English law (noting how other common law jurisdictions such as the US and Australia have developed it).

This new edition considers all relevant recent developments, including:

the developing case law on express or implied duties of good faith in negotiation or renegotiation of contracts, and decisions on the operation of “subject to contract” clauses, and the binding force of documents described as “letters of intent”, “heads of terms” and “memoranda of understanding”;

cases on intention to create legal relations, certainty and finding an agreement through offer and acceptance, including a “battle of forms” between the parties negotiating a contract;

the continuing discussion about the role of emerging technologies in the formation of contracts, including recent and possible future work by the Law Commission and other agencies on electronic signatures, the electronic execution of documents (including deeds) and smart contracts;

the reception by case law and commentators of the decision of the Supreme Court in MWB Business Exchange Centres Ltd v Rock Advertising Ltd (2018) in relation to (1) the binding force of “no oral modification” clauses, and the possibility of avoiding the operation of such clauses by the doctrine of estoppel; (2) the role of consideration in the variation of contracts, and the need for a full reconsideration of this area of the law of contract;

the significance for topics discussed in the book of the withdrawal of the United Kingdom from the European Union, including any changes already made to the EU law retained within English law after the end of the EU withdrawal agreement implementation period.