The United Nations Security Council and War: The Evolution of Thought and Practice since 1945 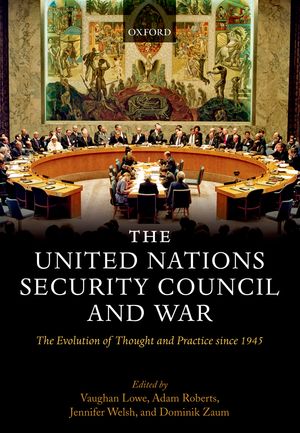 This is the first major exploration of the United Nations Security Council's part in addressing the problem of war, both civil and international, since 1945. Both during and after the Cold War the Council has acted in a limited and selective manner, and its work has sometimes resulted in failure. It has not been - and was never equipped to be - the centre of a comprehensive system of collective security. However, it remains the body charged with primary responsibility for international peace and security. It offers unique opportunities for international consultation and military collaboration, and for developing legal and normative frameworks. It has played a part in the reduction in the incidence of international war in the period since 1945. This study examines the extent to which the work of the UN Security Council, as it has evolved, has or has not replaced older systems of power politics and practices regarding the use of force. Its starting point is the failure to implement the UN Charter scheme of having combat forces under direct UN command. Instead, the Council has advanced the use of international peacekeeping forces; it has authorized coalitions of states to take military action; and it has developed some unanticipated roles such as the establishment of post-conflict transitional administrations, international criminal tribunals, and anti-terrorism committees. The book, bringing together distinguished scholars and practitioners, draws on the methods of the lawyer, the historian, the student of international relations, and the practitioner. It begins with an introductory overview of the Council's evolving roles and responsibilities. It then discusses specific thematic issues, and through a wide range of case studies examines the scope and limitations of the Council's involvement in war. It offers frank accounts of how belligerents viewed the UN, and how the Council acted and sometimes failed to act. The appendices provide comprehensive information - much of it not previously brought together in this form - of the extraordinary range of the Council's activities. This book is a project of the Oxford Leverhulme Programme on the Changing Character of War.