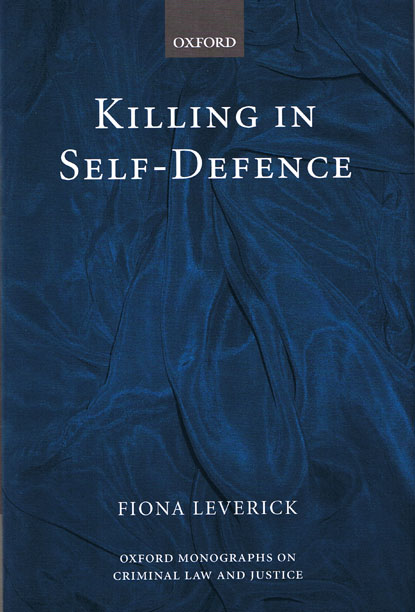 This book is a comprehensive analysis of the criminal defence of self-defence from a philosophical, legal and human rights perspective. The primary focus is on self-defence as a defence to homicide, as this is the most difficult type of self-defensive force to justify. Although not always recognised as such, self-defence is a contentious defence, permitting as it does the victim of an attack to preserve her life at the expense of another. If one holds that all human life is of equal value, explaining why this is permissible poses something of a challenge. It is particularly difficult to explain where the aggressor is, for reasons of non-age or insanity for example, not responsible for her actions.

The first part of the book is devoted to identifying the proper theoretical basis of a claim of self-defence. It examines the classification of defences, and the concepts of justification and excuse in particular, and locates self-defence within this classification. It considers the relationship between self-defence and the closely related defences of duress and necessity. It then proceeds critically to analyse various philosophical explanations of why self-defensive killing is justified, before concluding that the most convincing account is one that draws on the right to life with an accompanying theory of forfeiture.

The book then proceeds to draw upon this analysis to examine various aspects of the law of self-defence. There is detailed analysis of the way in which, on a human rights approach, it is appropriate to treat the issues of retreat, imminence of harm, self-generated self-defence, mistake and proportionality, with a particular focus on whether lethal force is ever permissible in protecting property or in preventing rape. The analysis draws on material from all of the major common law jurisdictions.

The book concludes with an examination of the implications that the European Convention on Human Rights might have for the law of self-defence, especially in the areas of mistaken belief and the degree of force permissible to protect property

Contents:
1. Introduction
2. The Classification of Defences
3. The Justification of Self-Defence
4. Retreat
5. Imminence of Harm
6. Self-Generated Self-Defence
7. Defence of Property
8. Defence Against Rape
9. Mistake
10. The Impact of the European Convention on Human Rights ;