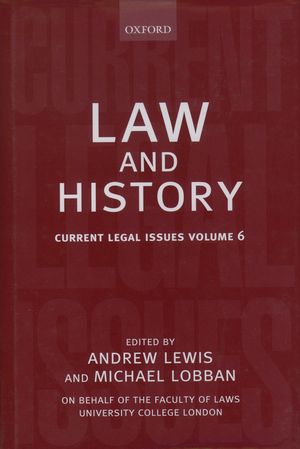 Law and History contains a collection of essays by prominent legal historians, which explore the ways in which history has been used by lawyers past and present to answer legal questions. In common with earlier volumes in the Current Legal Issues series, it seeks both a theoretical and methodological focus.

This volume covers a broad range of topics, from a discussion of the nature of norms in the middle ages to the role of war crimes trials in the twentieth century. It includes wide-ranging historiographical discussions, which examine the nature and aims of the legal historian, as well as contributions which explore the methodology and aims of writers such as Coke, Maine, Weber, Montesquieu, and Kames, who sought to use historical models to explain law.

A number of contributions examine developments in legal doctrine, particularly in the nineteenth century, including developments in the law of contract, administrative law, and perjury. These raise important questions about the nature of the legal categorizations which developed in that era. Law and History also includes a collection of contributons on the use of history in twentieth century trials, including the Nuremberg trials, the trial of the Gang of Four, and trials arising from the events in the former Yugoslavia and Rwanda.