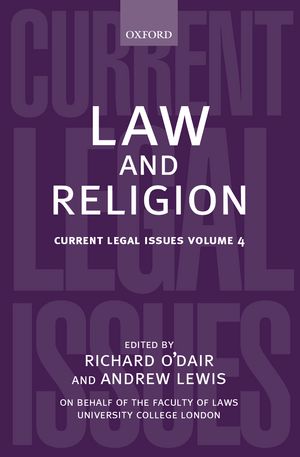 
Law and Religion, the fourth volume in the Current Legal Issues series, is a comprehensive treatment of an area that will stimulate and enlighten anyone interested in law and religion. Both common and civil law jurisdictions and a wide variety of cultural contexts are represented. In addition the volume contains contributions written from a wide variety of faith perspectives (Christian, Jewish, Islamic, Ba'hai) as well as from a secular perspective.

Contributors discuss a series of difficult and important issues from the interaction in contemporary societies of law and religious practice to the coherence of the notion of the soul and of the scope and limits of our concept of religion in a post modern world. A major theme of the volume is the common hermeneutical questions faced by the Islamic Christian and Jewish traditions. In addition, the implications for religious practice of the contemporary ascendancy of human rights are thoroughly and critically considered.

A number of the essays argue forcefully for controversial conclusions such as the legitimacy of the claim by some of the Christian Churches in New Zealand to exemption from legislation prohibiting discrimination on the grounds of sexual orientation. The European Convention on Human Rights and the jurisprudence of the Court come under particular critical scrutiny for example in relation to their protection of freedom of religion in the work place. Consideration is given to the extent to which State law can, should and does provide a regulatory framework for the life of religious institutions without compromising their collective autonomy for example in relation to matters of doctrine.

Contents:
Editorial Introduction
The Image of God and the Moral Identity of Persons: An Evaluation of the Holistic Theology of Persons
The Divine in the Law
Giving unto Caesar: Rationality, Reciprocity, and Legal Recognition of Religion
Politics and Sociology: New Research Agendas for the Study of Law and religion
Law as a Religious Enterprise: Legal Interpretation and Scriptural Interpretation
Historical Observations on the Relationship between Letter and Spirit
'Batter My Heart': On the Three Disciplined Search for Meaning
Postmodernism, Hermeneutics, and Authenticity: Interpreting Legal and Theological Texts in the 21st Century
The 'First Source' of Islamic Law: Muslim Legal Exegesis of the Qua'an
Law and Religion: The Case of the History of Human Rights: Freedom of Religion as the Fruit of the Radical Reformation
The European Court of Human Rights and Religion
Human Rights, Religious Liberty, and the University Debate
Religious Liberty as a Collective Right
Clashing Rights, Exemptions, and Opt-Outs: Religious Liberty and 'Homophobia'
Religious Group Autonomy, Gay Ordination and Human Rights Law
Freedom of Religion: Legal Perspective on Religion
Professional Ethics and Autonomy: A Theological Critique
Clergy Privilege and Conscientious Objection to the Privilege
Is the Jewish 'Get' any Business of the State?
The Intersecting Worlds of Religious and Secular Marriage
Judicial Approaches to Religious Disputes
Justifications for Religious Autonomy
Religious Remants in the Composition of the United Kingdom parliament
Religious Denomination or Public Religion?: The Legal Status of the Church of England
Defining the Legal Boundaries of Orthodoxy: For Public and Private Religion in England
International Law and Peace between the Nations: The Contribution of the Baha'i Faith
A Voyage in God's Canoe: Law and Religion in Melanesia
Christian Perspectives on the Law: What Makes them Distinctive?
Radical Change in the Legal Regulation of Religious Affairs as Exemplified by Post-Communist Poland