The European Union and Its Court of Justice 2nd ed 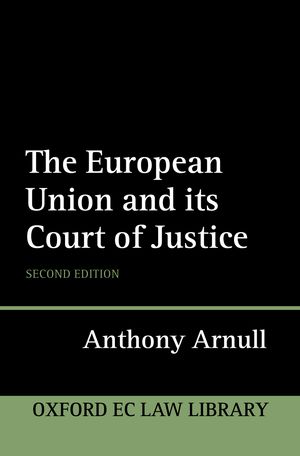 The European Court of Justice is a controversial institution. Its supporters see it as having played a central and positive role in shaping a polity which has given its Member States an unprecedented degree of peace, stability and prosperity. To its detractors, it has ignored the Treaties from which it derives its powers in order to pursue an agenda of its own about the political shape of Europe.

This book analyses the Court's place in the institutional architecture of the European Union and its contribution to the constitutionalization of the Union and the development of the Union's substantive law.

Questions examined include the jurisdiction of the Court; the relationship between Union law and national law; the impact of Union law on national laws concerning remedies; and the protection of fundamental rights. The book also looks at certain key areas of substantive law which have to a large extent been judicially constructed.

Contents:
1. Europe's Judges
2. Infringement Proceedings
3. The Action for Anulment
4. The Preliminary Rulings Procedure
5. The Judicial Architecture of the Union
6. Treaty provisions and National Law
7. Direct effect and Community Acts
8. Direct effect, Primacy, and the National Courts
9. European Rights, National Remedies
10. General Principles of Law and Fundamental Rights
11. The Free Movement of Goods
12. The Free Movement of Workers
13. The Right of Establishment and Freedom to Provide Services
14. Towards Citizenship
15. Equal Treatment for Men and Women
16. Interpretation and the Limits of Literalism
17. The Normative Status of the Case Law
18. Judging Europe's Judges ;