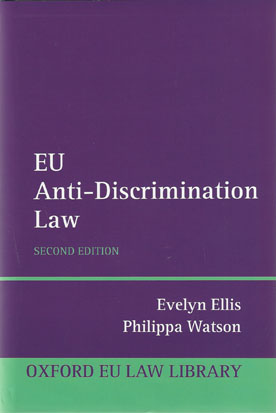 EU Anti-Discrimination Law provides a detailed and critical analysis of the corpus of European Union law prohibiting discrimination on the grounds of sex, racial or ethnic origin, religion or belief, disability, age, and sexual orientation. It takes into account the changes brought about by the Treaty of Lisbon and contains a thorough examination of the relevant case law of the Court of Justice of the EU.

The book examines the background to the legislation and explains the essential characteristics and doctrines of EU law and their relevancy to the topic of anti-discrimination. It also analyses the increasingly significant general principles of EU law, the Charter of Fundamental Rights, and the relevant law flowing from the European Convention on Human Rights.

The key concepts contained in anti-discrimination law are subjected to close scrutiny. The substantive provisions of the law on equal pay and the workplace and non-workplace provisions of the governing Directives are similarly examined, as are the numerous exceptions permitted to them. The complex rules governing the rights of pregnant women and those who have recently given birth are dealt with comprehensively and in a separate chapter.

Equality in social security schemes is also discussed. The book concludes with an assessment of the practical utility of the existing law and the current proposals for its reform.