Comparative Law in Legislative Drafting: The Increasing Importance of Dialogue amongst Parliaments 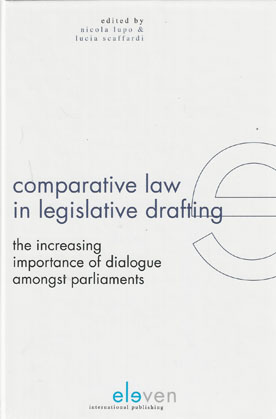 This volume examines whether contemporary parliaments use foreign and comparative law in the legislative process. The research reports covered in this book apply the same methodological approach, focusing on the information apparatus available to the legislators and on the rules and practices that regulate the drafting and approval of bills.

Subsequently, it examines several examples of recent legislation in which foreign law has been taken into consideration: in an explicit or implicit way, in order to be accepted or refused, according to a mere instrumental aim or following a rigorous comparative methodology.

Contributions are from experts in the field covering the following jurisdictions: the UK, USA, Canada, Australia, European Union, Israel, Italy, Spain, Romania, South Africa, Portugal, Brazil, Namibia and China. They give valuable insights into how legal transplantation and synthesis take place and whether it is a coherent and valuable practice.

Contents:
Introduction
Legislation as transplantation
Part I: European experiences
The influence of comparative law on the Portuguese Parliament and the legislative process
"Foreign influence" in the EU law-making. The sui generis case of European Parliament
The EU-driven foreign influences on legislation in Romania
The use of comparative design in the Spanish parliamentary architecture and legislative decision-making
Foreign influences on (the procedure and on the content of) the Italian legislative process
The use of comparative law in the legislative process at Westminster
Part II: Extra-European experiences
Legal transplants in the Australian legal system
Brazilian legislator's vocation for using foreign law
The influence of comparative law in South African law
Foreign Flavours in the American Legislative Sausage?
Shaping Law Through Inter-Parliamentary Cooperation: The Case Of Canada
Foreign Influences on Legislative Process in Namibia
Channeling Foreign Law Models into Domestic Legislation. A First Inquiry on the law-making process of the Chinese Environmental Protection Law
Conclusion