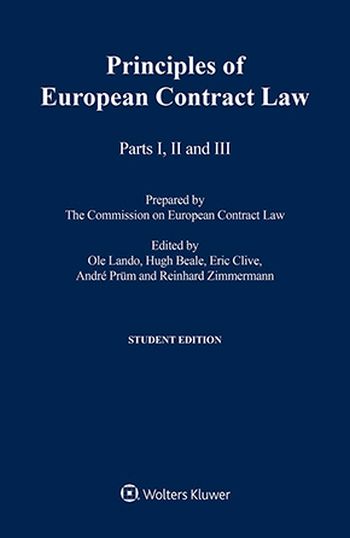 The Principles of European Contract Law provides the fundamental principles of contract law shared by the legal systems of the Member States and to have a concise, comprehensive and workable statement of them. The Principles of European Contract Law Parts I & II covers the core rules of contract: formation, authority of agents, validity, interpretation, contents, performance, non-performance and remedies. The subjects dealt with in Part III are: plurality of debtors and creditors, assignment, substitution of new debtor and transfer of contract, set-off, prescription, illegality, conditions and capitalization of interest.

The Principles have been drawn up by an independent body of experts from each Member State of the EU, under a project supported by the European Commission and many other organisations. The Principles are stated in the form of articles, with a detailed commentary explaining the purpose and operation of each article and its relation to the remainder. A particularly valuable feature is that each article also has extensive comparative notes surveying the national laws and other international provisions on the topic.

No self-respecting contract lawyer in Europe can afford to ignore the Lando Principles. They are not only a useful and convenient source of information about current laws in the countries of the European Union but also a possible blueprint for the contract part of a future European civil code. They are a touchstone against which any discussion of contract law can be tested.