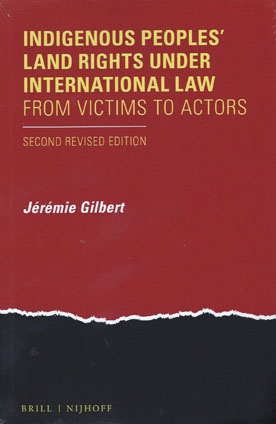 This book addresses the right of indigenous peoples to live, own and use their traditional territories. Whilst a profound cultural and social relationship with land and territories characterizes indigenous peoples’ cultures, they have been and are repeatedly deprived of their lands.

This book analyses how international law addresses indigenous peoples’ rights to live on their traditional territories. Through its meticulous and wide-ranging examination of the interaction between international law and indigenous peoples’ land rights, the work explores several burning issues such as collective rights, self-determination, property rights, cultural rights and restitution of land.

In assessing the international legal approach to land rights the book delves into the notion of past violations and the role of international law in providing for remedies, reparation and restitution. It also argues that there is a new phase in the relationship between States, indigenous peoples and private actors, such as corporations, in the making of territorial agreements.

Based on such analysis it explores how international law can play an important role in supporting a new approach to development and globalization in supporting the rights of indigenous peoples over their lands and natural resources as an essential element of their future.

Contents:
Preface
About the author
Table of Cases
Table of Instruments
List of abbreviations
Introduction
Territoriality: The Thread of Indigenous Cultures
PART I: INDIGENOUS PEOPLES AS VICTIMS: THEORIES OF DISPOSSESSION
Chapter 1: Means of Acquisition
A. The Conquest of Indigenous Territories
1. Justifications of Conquest: Commerce, Christianity and Civilization
2. Discriminatory Rules of Conquest
B. The Occupation of Indigenous Territories
1. The Post-Westphalian Order: Dichotomy Between Nations and Indigenous Communities
2. Occupation of ‘Vacant’ Territories: Terra Nullius as a Legal Fiction
3. Terra Nullius by Other Means: Contemporary Forms of Denial
Chapter 2: Means of Extinguishment
A. The Extinguishment of Indigenous Territorial Sovereignty by Colonial Treaties
1. A Process of Retrogression: From International Law to “Domestic Dependent Nations”
2. The “Trail of Broken Treaties”: Contemporary Enforcement of Colonial Treaties
B. Theories of Extinguishable Indigenous Land Rights
1. Discovery: A Theory of Extinguishable Right of Occupancy
2. Contemporary Theories of Extinguishable Indigenous Title
PART II: INDIGENOUS PEOPLES AS SUBJECTS: THEORIES OF PROTECTION
Chapter 3: Land Rights as Proprietary Rights
A. Property Rights: Sources and Content
1. Weaknesses and Promises of the Property Rights Discourse
2. Indigenous Peoples’ Right to Collective Land Ownership
B. Effective Measures of Protection and Demarcation
1. Restriction on Land Transferability: The Danger of Paternalism
2. Land Identification and Demarcation
C. Reparation, Restitution and Compensation
1. The Right to Restitution
2. Addressing Past Dispossession: The Role of Human Rights
Chapter 4: Land Rights as Cultural Rights
A. Land is Life: Land Rights as Subsistence Rights
1. Land Rights as a Means to a Collective Existence
2. Right to Subsistence, Access to Livelihood and the Right to Life
B. Land Rights as a Way of Life: Traditions and Spirituality
1. The Minority Rights Approach
2. Religion, Spirituality and Land Rights
C. Land Rights as Cultural Heritage: Towards a Right to Cultural Integrity
1. The Cultural Heritage Approach: The Danger of Compartmentalisation
2. The Holistic Approach: Land Rights as Cultural Integrity
PART III INDIGENOUS PEOPLES AS ACTORS: NEGOTIATING LAND RIGHTS
Chapter 5: Self-Determination, Territoriality and Consent
A. The Self-Determination and Land Rights Nexus
1. The Caveat of Self-Determination: States’ Territorial Integrity
2. The Relational and Interpretative Values of Self-determination
B. Self-determination, Natural Resources and Consent
1. Self-determination, Land Rights and Natural Resources
2. Self-determination and Free, Prior and Informed Consent
Chapter 6: Development, Globalisation and Land Rights
A. Development, Participation and Land Rights
1. ‘Development Aggression’, the Right to Development & Land Rights
2. Development, Effective Participation and Consent
B. Ownership and Control of Natural Resources: From Subsistence to Benefit-Sharing
1. Ownership and Control of Natural Resources: A Right to Subsistence?
2. Towards a Right to Benefit-Sharing?
C. Nature Conservation, Exploitation of Natural Resources, and Private Actors
1. Nature Conservation, Tourism & Indigenous Peoples’ Land Rights: towards co-management?
2. Corporations, Human Rights Law and Land Rights
Conclusion
Selected Bibliography
Index.