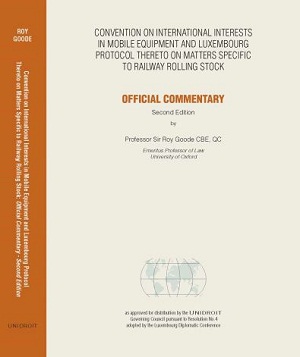 The Convention on International Interests in Mobile Equipment was concluded at a Diplomatic Conference held in Cape Town, South Africa, in November 2001. The Convention is one of the most ambitious and imaginative commercial law Conventions ever to have been concluded. It provides for an international legal regime for the creation, perfection and priority of security, title retention and leasing interests in aircraft equipment, railway rolling stock and space assets, and for an International Registry to record those interests, with a view to reducing the risks and costs involved in financing high-value mobile equipment.

Professor Sir Roy Goode, CBE, QC, is Emeritus Professor of Law in the University of Oxford, Emeritus Fellow of St John’s College, Oxford, and a Fellow of the British Academy. As Chairman of the UNIDROIT Study Group that initiated this project, Rapporteur to the three Joint Sessions of the UNIDROIT committee of governmental experts and the ICAO Legal Sub-Committee, Chairman of the Drafting Committee at the Cape Town Diplomatic Conference, and Rapporteur to the Luxembourg Diplomatic Conference, Sir Roy was uniquely qualified to fulfil the mandate given to him by the Luxembourg Diplomatic Conference to prepare an Official Commentary.