Shareholder Activism in the UK 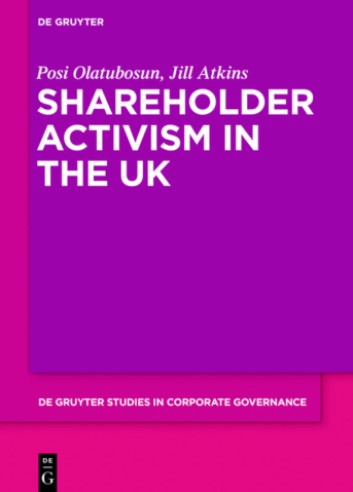 Shareholder activism is not a totally new phenomenon in the UK as there were historical suggestions of owners’ engagements in the era of chartered companies (pre-incorporation period). There have also been many evidences of unconventional and uncoordinated shareholder engagement techniques especially by minority shareholders after the Second World War up to 2006 when the 2006 Companies Act recognised the need to make it easier for shareholders to present resolutions at general meetings. These developments, alongside various deliberate actions by government and international organisations like UNPRI in increasing shareholder engagement, together with other new developments like integrated reporting systems, responsible investing, and climate change, have given rise to various forms of activism which have not been documented and analysed by previous writers.

Shareholder resolutions submitted in the UK between 2007 and 2017 are also analysed, and this demonstrates the emerging powers and the conflicted roles of proxy advisors, social investors and other influential investors such as UKSA and ShareSoc in the UK investment chain. Other emerging issues such as the usefulness of analysis of analyst type investors meetings are also critically discussed.