The Evolving Psyche of Law in Europe: The Psychology of Human Rights and Asylum Frameworks 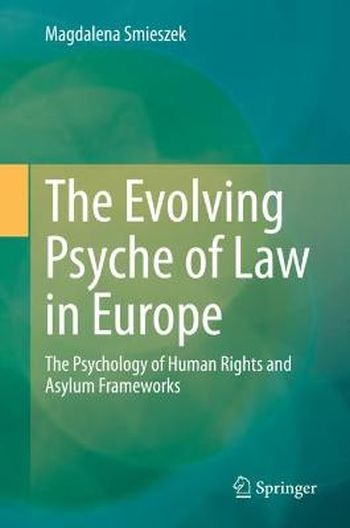 The book applies an interdisciplinary analytical framework, based on social psychology theories of inclusion and exclusion, to a discussion of legal discourse and the development of legal frameworks in Europe concerning migrants, asylum seekers, refugees, and European citizens. It adopts a psycho-historical perspective to discuss the evolution of international and European law with regard to the rights of citizens and asylum-seeking non-citizens, from the law's inception following the Second World War up to present-day laws and policies. The book reveals the embracing of a European identity based on human rights as the common feature in European treaties and institutions, one that is focused on European citizens and has inclusionary objectives. However, a cognitive dissonance can also be found, as this common identity-making runs counter to national proclivities, as well as securitized, threat-perception-oriented perspectives that can produce exclusionary manifestations concerning persons seeking asylum. In particular, a view of inclusion and exclusion via legal categorizations of status, as well as distributions of social and economic rights, draws attention to the links between social psychology and international law. What emerges in the analysis: a process of creating value is present both at its psychological roots and the expressions of value in the law. Fundamentally speaking, the emergence of laws and policies that center on human beings and human dignity, when understood from a psychological and emotion-based perspective, has the potential to transcend the dissonances identified.