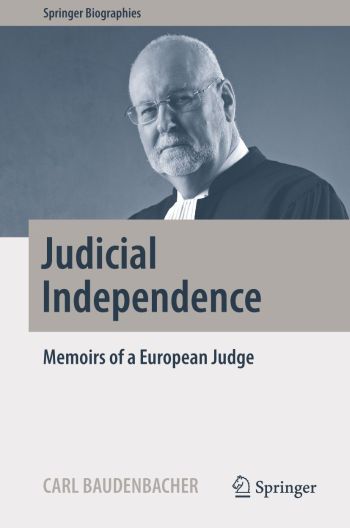 This book is about law, but it is not a law book. It is aimed at all interested contemporaries, lawyers and non-lawyers alike. Richly seasoned with personal memories and anecdotes, it offers unique insights into how European courts actually work.It is generally assumed that independence is part and parcel of the role and function of a judge. Nevertheless, European judges sometimes face difficulties in this regard. Owing to their being nominated by a government, their limited term of appointment, and the possibility of being reappointed or not, their judicial independence can be jeopardized. Certain governments have a track record of choosing candidates who they believe they can keep on a leash. When this happens, private parties are at risk of losing out.

The EFTA Court is under even more pressure, since the EEA/EFTA states Iceland, Liechtenstein and Norway essentially constitute a pond with one big fish (Norway) and two minnows. For quite some time now, certain Norwegian protagonists have sought to effectively transform the EEA into a bilateral agreement with the EU. This attitude has led to political implications that have affected the author himself.The independence of the EFTA Court is also endangered by the fact that it operates alongside a large sister court, the Court of Justice of the European Union. And yet the EFTA Court has established its own line of jurisprudence and its own judicial style. It has remained faithful to specific EFTA values, such as the belief in free trade and open markets, efficiency, and a modern view of mankind. During the first 24 years of its existence, it has even had an over-proportionate influence on ECJ case law.Since EEA Single Market law is economic law, the importance of economics, an often-overlooked aspect, is also addressed. In closing, the book explores Switzerland’s complicated relationship with, and Britain’s impending departure from, the EU. In this regard, it argues that the EFTA pillar should be expanded into a second European structure under British leadership and with Swiss participation.