A Practical Guide to Responding to Housing Disrepair and Unfitness Claims 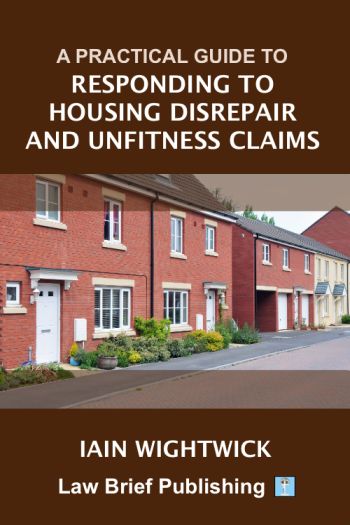 Disrepair (or more properly “housing conditions”) claims are on the rise. This book should be helpful to those receiving and responding to them.

Such claims increased by 44% between 2012 and 2017 in England and Wales and they have continued to proliferate. In those five years Southwark LBC paid out about £10,000,000 in damages and costs. Sheffield City Council has disclosed that it has spent more than £1 million fighting disrepair claims within the last 2½ years. There has been a 322% increase in cases, which they blame on claims management companies using “aggressive marketing tactics” to attract tenants who are unhappy about the state of their homes during the pandemic. That has been greatly exacerbated by the inability on the part of all landlords to do repairs other than urgent works.

Housing conditions claims are not just wasteful in terms of officer time and finances. They can be very stressful for those involved, particularly where landlords face large numbers of claims and their staff are already busy planning and carrying out repairs, maintenance and improvements. I anticipate that all landlords would prefer to direct their resources to repairs rather than legal fees.

The book is more about the strategies needed to deal with disrepair litigation rather than the substantive law.

If you are a tenant’s representative, I hope that the book will help you to weed out good claims from the many which are at present gratuitously and unnecessarily issued. Fortunately, the Court of Appeal has just handed down a very helpful decision on an application for permission to appeal. In Hockett v Bristol City Council (2021) unreported, Ref: B2/2021/1025, Lord Justice Bean agreed with the approach which I conceived a number of years ago, and which has been approved of by many judges in the County Court.

I hope that the application of that philosophy to disrepair claims will dramatically reduce the legal bills currently being paid by social landlords. Many of the complaints which tenants are making about housing conditions should never have involved lawyers. You’ll need to buy the book to find out more about it though!