This book is now Out of Print.
A new edition has been published, the details can be seen here:
Both Sides of the Bench isbn 9781909976313

Both Sides of the Bench 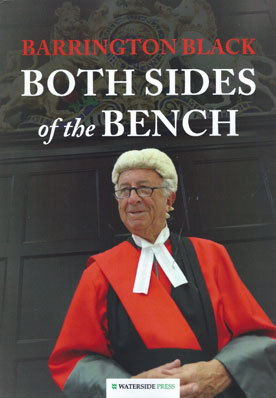 
Barrington Black was for many years one of the UK's best-known criminal defence lawyers and founder of a solicitor's firm in Leeds now commemorated in the name of a practice known as Black's.

He was later a Metropolitan Stipendiary Magistrate and Circuit Judge in the Crown Court before becoming a Supreme Court Justice in Gibraltar. Both Sides of the Bench charts his life, legal and judicial progress and his contributions as legal expert to such programmes as BBC TV Look North and Yorkshire Television's Calendar.

Always in demand due to his reputation as a reliable defence solicitor, he was sought out by among others the serial killer Donald Neilson also known as the Black Panther as well as being involved in other high profile cases. His accounts of these and other fascinating cases from his life as a lawyer and judge form the main parts of this compelling book which also looks at his early life, political ambitions and time in the army when he was involved in Courts Martial.

It also takes readers behind the scenes to show what it is like to establish and run a legal practice as it grows and develops and contains insights into the normally private and behind the scenes world of judiciary. Written by one of the UK's best-remembered defence lawyers. Takes the reader behind the scenes of life as a busy lawyer, judge and family man.

A valuable social history due to its descriptive passages of parts of London and England and Wales.Contains criticisms of the way criminal defence is at-risk of dilution.