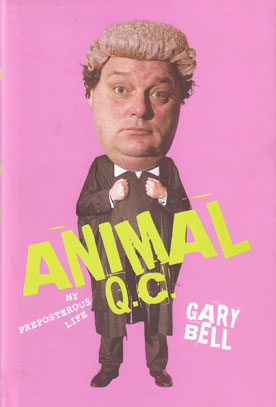 Gary Bell QC appears to be a pillar of the Establishment - one of Britain's leading lawyers, with his own BBC TV show, an entry in Who's Who, and a wife whose family are listed in Burke's Landed Gentry. But beneath the horsehair wig and silk gown is a very unusual barrister indeed - and his life story is astonishing and hilarious.

Born to a teenaged cigarette factory worker and a nineteen-year-old miner, he grew up in a condemned slum terrace and then a Nottinghamshire pit village, and left his tough comprehensive without taking any exams. He followed his father down the mine but promptly quit because of his lifelong fear of the dark, and spent the next decade either homeless or working in a strange variety of jobs.

Along the way, he managed to rack up a conviction for fraud - he worked out how to fiddle those fruit machines - and was also a notorious football hooligan known as 'Animal' (though not for his fighting prowess, he's a terrible coward).

Finally pulling himself together in his mid-twenties, he went to university as a mature student, where he stuck out from his younger, public school-educated contemporaries with his stonewashed jeans, skinhead and moustache. So he 'decided to become upper-middle class', adopting tweeds, received pronunciation, and (strictly for his own amusement) an Old Etonian back story. He got so good at this that he went back to his 'old school' to play in Old Boys' Field Game fixtures, and many actual OE's still swear they were at Eton with him.

There's much more to say about Gary Bell - international debating champion, award-winning stand-up comic, Beverly Hills lawyer (he was recruited whilst still a student), chronic bedwetter, private pilot, friend of The Village People, devoted dad - but there isn't the space.

Now among the country's top defence barristers - his cases are so complex that the papers are not counted but weighed, and they often weigh ten or fifteen tonnes - his preposterous story reads like a strange dream and redefines the word 'amazing', as well as being extremely funny, very moving, and utterly life-affirming.