Beyond the Established Legal Orders: Policy Interconnections between the EU and the Rest of the World 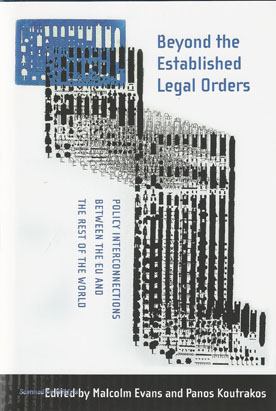 A lively debate on the constitutionalisation of the international legal order has emerged in recent years. A similar debate has also taken place within the European Union.

This book complements that debate, exploring the underlying realities which the moves towards constitutionalism seek to address. It does this by focussing on the substantive interconnections which the EU has developed over the years with the rest of the world, and assesses the practical impact which these have both in the development of its legal order as well as the international community.

Based on papers delivered at the bi-annual EU-International Law Forum organised by the University of Bristol in March 2009, this collection of essays examines policy areas of economic governance (trade, financial services, migration, environment), political governance (human rights, criminal law, responses to financing terrorism), security governance (counter-terrorism, use of force, non-proliferation), and the issue of the emergence of European and global values.

How are these areas shaped by the interaction between EU law and other legal orders and polities? In what ways does the EU impact on other transnational legal systems? And how are its own rules and principles shaped by such systems? These questions are addressed in the light of the specific legal and political context within which the EU pursues its policies by interacting with the rest of the world.

Contents:
1. Much More Than Trade: The Common Commercial Policy in a Global Context
Joris Larik
2. Capital Market Openness After Financial Turmoil
Eilis Ferran
3. When is Migration not Migration? Examining Services in the EU and GATS
Elspeth Guild
4. Diplomacy by Directive? An Analysis of the International Context of the Emissions Trading Scheme Directive
Hans Vedder
5. The EU and the International Legal Order: The Case of Human Rights
Bruno De Witte
6. The European Union and the Rest of the World: Criminal Law and Policy Interconnections
Valsamis Mitsilegas
7. The Principle of Legality, Human Rights and the Management of Risks: Post-Kadi Reflections
Takis Tridimas
8. Europe’s Counter-terrorism Law(s): Outlines of a Critical Approach
Jan Klabbers
9. Reflections on European Effective Multilateralism and the Use of Force
10. The Non-proliferation Policy of the European Union
Panos Koutrakos
11. Values in EU Foreign Policy
Marise Cremona
12. Principled Monism and the Normative Conception of Coercion under International Law
George Pavlakos and Joost Pauwelyn