Shakespeare and the Law 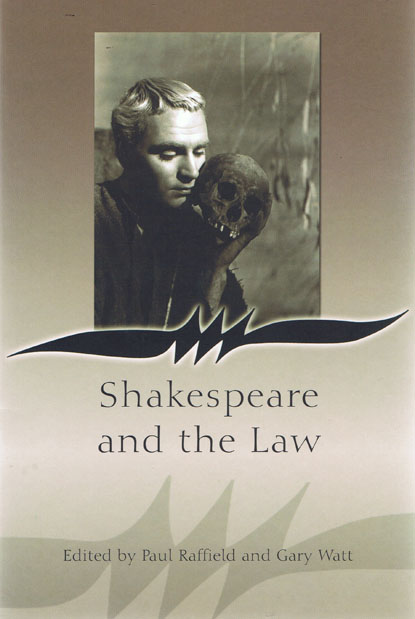 In July 2007, the School of Law at the University of Warwick hosted an international conference on Shakespeare and the Law. This was a truly interdisciplinary event, which included contributions from eminent speakers in the fields of English, history, theatre and law. The intention was to provide a congenial forum for the exploration, dissemination and discussion of Shakespeare's evident fascination with and knowledge of law, and its manifestation in his works.

The papers included in this volume reflect the diverse academic interests of participants at the conference. The eclectic themes of the edited collection range from analyses of the juristic content of specific plays, as in:-

To more general explorations of Shakespearean jurisprudence, including:-

Contents:
Foreword (Carol Chillington Rutter)
Introduction (Paul Raffield and Gary Watt)
I. Shakespeare, Money and the Law of Contract
1. Mark Fortier, 'Shakespeare and Specific Performance'
2. Andrew Zurcher, 'Consideration, Contract and the End of The Comedy of Errors'
II. Shakespeare, Women and the Law
3. Jonathan Bate, 'The Bawdy Court'
4. Germaine Greer, 'Shakespeare and the Marriage Contract'
5. Erika Rackley, 'Judging Isabella: Justice, Care and Relationships in Measure for Measure'
III. Shakespeare and the Law of Love
6. Bradin Cormack, 'Shakespeare Possessed: Legal Affect and the Time of Holding'
7. Katrin Trüstedt, 'The Tragedy of Law in Shakespearean Romance'
8. Daniella Carpi, 'Law and its Subversion in Romeo and Juliet'
IV. Justice and the Royal Prerogative
9. Carolyn Sale, 'The King is a Thing': the King's Prerogative and the Treasure of the
Realm in Plowden's Report of the Case of Mines and Shakespeare's Hamlet'
10. Giuseppina Restivo, 'Inheritance in the Legal and Ideological Debate of Shakespeare's King Lear'
V. Violence, the State and the Citizen
11. Harry Keyishian, 'Punishment Theory in the Renaissance: the Law and the Drama'
12. Ian Ward, 'Terrorists and Equivocators'
13. Paul Raffield, 'Terras Astraea reliquit': Titus Andronicus and the Loss of Justice'
14. Christian Biet, 'Titus Andronicus vs Le More Cruel and Les Portugais Infortunés: Humiliation, Punishment and Violence in the Shakespearean and French Theatre of the Late Sixteenth and Early Seventeenth Century'
VI. The Merchant of Venice and the Infinite Meanings of 'Law'
15. Gary Watt, 'The Law of Dramatic Properties in The Merchant of Venice'
16. Istvan Pogany, 'Shylock in Transylvania: Anti-Semitism and the Law in East Central Europe'
17. Anton Schütz, 'Shylock as a Politician'
18. Richard H. Weisberg, 'The Concept and Performance of 'The Code' in The Merchant of Venice'