As Far as I Remember 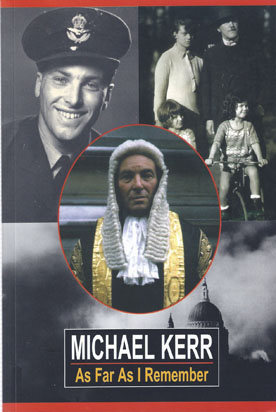 In the first part of his memoir, the author reveals his family history and his Germanic roots. His father, Alfred Kerr, was a well-known drama critic and intellectual, whose writings were widely known throughout Germany during the Weimar Republic. As Jews, the Kerrs were forced to flee their homeland before the outbreak of World War II, but the author tells of a predominantly happy childhood spent in such varied places as Germany, Switzerland, France and England.

Kerr's memoirs also tell of his years at Aldenham and Cambridge and his assimilation into the English way of life. They also relate the story of his internment as an ""enemy alien"" during the early years of World War II and of his subsequent service as a crack pilot for the Royal Air Force. After the war, the author returned to Cambridge to finish his law degree. He was subsequently urged to go to the Bar.

The final chapters of this autobiography are devoted to chronicling the author's glittering legal career as a leading commercial silk and, ultimately, Judge of Appeals.

Contents:
The beginning
my father and his family
my grandparents
my mother
my father's work
my parents together
my sister
the early years
the twenties
clouds
flight
Switzerland
an interlude - "fast forward"
to France
Paris - the beginning
Lycee Michelet
the Fizaines (and others)
Paris - the second year
to Nice
our parents in London
the end of the Lycee de Nice
the promised land
Aldenham
the first year
1937
1938-1939
the final end of Nice
the phoney war - Cambridge
the real war starts
internment
reactions
the Isle of Man
release
another interlude - "fast forward"
the Blitz - back to Aldenham - the RAF
air crew cadet
wings
learning to teach flying
flying instructor back in Cambridge
twin engines
joining a Wellington crew
twin engines
612.
Squadron
the war in Europe ends
demobilisation
post-war Cambridge
1946
1947
Michele
going to the Bar
my mother leaves
my father's death
a postscript
beginnings at the Bar
marriage, etc
my mother in Germany
a painful family reunion
my mother's death
end of a generation
the second half
the junior Bar
silk
some highlights
towards the end of the Bar
the Bench?
life as a judge
separation
the Law Commission
Diana
the Court of Appeal
disappointments
a new profession
a resurrection
epilogue
annexe - the Macao Sardine Case.