Human Rights in Eastern Civilisations: Some Reflections of a Former UN Special Rapporteur 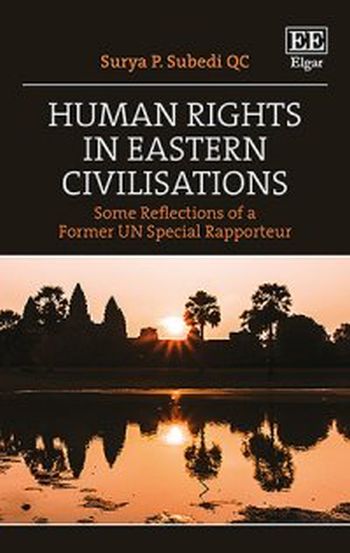 Based on the author's first-hand experience as a UN Special Rapporteur, this thought-provoking and original book examines the values of Eastern civilisations and their contribution to the development of the UN Human Rights agenda.

Offering an authoritative analysis of Hindu and Buddhist traditions, Surya P. Subedi, QC, focuses on the norms underpinning these two seminal Eastern philosophies to assess the extent to which the ancient civilisations already have human rights values embedded in them. Chapters explore the expression of values in the scriptures and practices of these philosophies, assessing their influence on the contemporary understanding of human rights. Rejecting the argument based on “Asian Values” that is often used to undermine the universality of human rights, the book argues that secularism, personal liberty and universalism are at the heart of both Hindu and Buddhist traditions.

The unique perspective offered by Human Rights in Eastern Civilisations will appeal to students, academics and researchers in a wide range of disciplines, including human rights, international law and relations, and religious studies.

Contents:
Introduction
1. Evolution of Eastern belief systems
2. Human rights values in Eastern civilisations
3. The principles of humanitarian law in Hinduism
4. China’s approach to human rights and the UN human rights agenda
5. The impact on the universality of human rights of the shift of power to the East
6. Human rights challenges in a country with a Hindu-Buddhist heritage: A case study of Cambodia
Conclusions
Index