The Law of Treasure 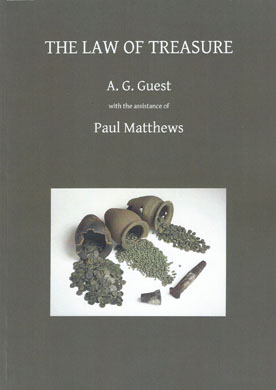 The importance of the Law of Treasure is largely the result of the spectacular growth in the activity of metal detecting which, starting in the 1960's, has grown so much in popularity that it now brings to our knowledge each year more than a thousand objects of historical, cultural or archaeological interest.

The nature and volume of these finds has in turn led to a greater public concern to ensure that measures exist which will be conducive to the retention and effective preservation of the more important of those objects.

It is, of course, essential that facilities exist for the physical examination and conservation of finds and that those facilities should be accessible and adequate. But the law has an important part to play in this process by ensuring that finds of substantial value or importance should be preserved for the nation and made available to the public in museums.

For many hundreds of years, the Law of Treasure was the common law of treasure trove. Today it is essentially based on the Treasure Act 1996. Although the Act is a great improvement on the common law it is nevertheless not always rational and the meaning of some of its provisions is sometimes obscure. This book aims to provide a reliable guide to the Law of Treasure in England, Wales and Northern Ireland and also to explain the role played by legal institutions, such as the Coroner, in that process.

This book will be of interest to archaeologists, museums, coroner's offices, finds liaison officers, farmers and landlords' associations. It will also be of interest and utility to metal detectorists since, in addition to explaining what objects are considered to be treasure by the law, it explains the legal restrictions on searching for artefacts, the duty to report finds of treasure and the structure of the valuation process and rewards.