Women's Legal Landmarks: Celebrating 100 Years of Women and Law in the UK and Ireland 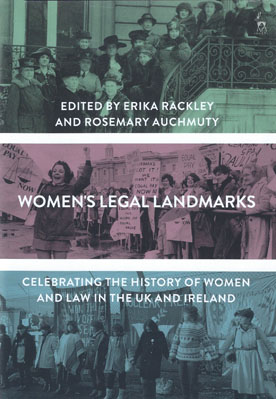 Women's Legal Landmarks commemorates the centenary of women's admission in 1919 to the legal profession in the UK and Ireland by identifying key legal landmarks in women's legal history.

Over 90 authors write on landmarks that represent a significant achievement or marked an important stage or turning point in women's engagement with law and law reform. The landmarks embrace a wide range of topics, including the right to vote, equal pay, forced marriage, sexual violence, abortion and the ordination of women bishops, as well as the life stories of women who were the first to undertake key legal roles and positions.

The collection was produced using an established feminist practice whereby each contribution was presented in collaborative workshops to ensure shared knowledge and insights into both the legal area and the historical context.

Women's Legal Landmarks offers a scholarly intervention into the recovery of women's lost history, employing the methodology of feminist legal history to provide accounts which are accurate as to both law and historical context and which, taken together, demonstrate women's agency and activism in the achievement of law reform and justice.