Debattista on Bills of Lading in Commodities Trade 4th ed 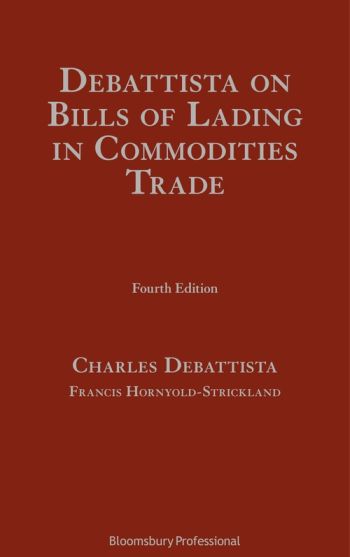 Bills of Lading in Export Trade provides a clear understanding of the complex connections between the contracts of sale, carriage and letter of credit. Split in three parts covering (i) documentary control over the goods, (ii) risk, title to sue and property and (iii) tender of an applicable bill of lading. This title looks at the bills of lading document as an instrument of international trade, and concentrates on the different things that sellers, buyers and banks want out of bills of lading. It also considers the practical and legal problems which can arise when the sale, carriage and letter of credit contracts do not agree on what the bill of lading should look like.

Fully revised and updated the new edition covers recent cases that have had a fundamental impact on international trade law such as The Saga Explorer (2013), Caresse Navigation Ltd v Zurich Assurances Maroc and Others (The Channel Ranger) (2014), and The Erin Schulte (2013).

In addition there is new material on the relationship between the physical and documentary duties on sellers in CIF and FOB sales; the relationship between the opening of a letter of credit and the existence of a sale contract; who is a lawful holder of a bill of lading for the purposes of establishing a buyer's title to sue; time of shipment being of the essence; the court's task in construing poorly drafted international sale contracts; and the effect of certificate final clauses.

Contents:
Chapter 1: Documentary sales on shipment terms: an introduction to contracts and duties in international sales
PART I - DOCUMENTARY CONTROL OVER THE GOODS
Chapter 2: The right to claim delivery of the goods
Chapter 3: The power to transfer the right to claim delivery
PART II - RISK, TITLE TO SUE AND PROPERTY
Chapter 4: Risk of loss and the righ to sue the carrier on the contract of carriage
Chapter 5: The transfer of property in the international sale of goods carried by sea
PART III - TENDER OF AN ACCETABLE BILL OF LADING
Chapter 6: Tender of the bill of lading as a receipt
Chapter 7: Tender of the bill of lading as a contract of carriage
Chapter 8: Tender of bills of lasing under charterparties
Chapter 9: Rejection of documents and goods
APPENDICES