Tom Hughes QC: A Cab on the Rank 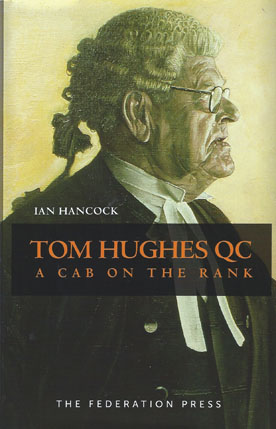 For more than thirty years, Tom Hughes, a scion of a notable Sydney family of high achievers, was one of Australia’s top barristers, renowned, respected and sometimes feared for his dominating presence in the courtroom.

Equally at home in all jurisdictions, his theatrical style, command of language and forensic skills filled public galleries, exposed witnesses, persuaded juries and ensured that judges paid attention. An icon of the Sydney and Australian Bar, he appeared in a raft of celebrated cases, became the subject of many media profiles and was, from the 1970s to the 1990s, the country’s most expensive advocate.

Hughes has also been a wartime pilot, a politician, an activist federal Attorney-General, a grazier, and a racehorse owner. He survived a broken marriage, a spiteful sacking from ministerial office and a prolonged though not permanent loss of an inherited Catholic faith.

He endured years of frustration before finding the right partner to replicate the perfect marriage of his beloved parents. Even in dark times, however, a thorough professional and a prodigious worker, Hughes remained focused on his first love, the law, always upholding its traditions and processes.

In addition to published material, the book draws on a huge trove of personal records, including fee books, intimate diaries, autobiographical jottings and private correspondence, supplemented by interviews with Hughes, his family, friends and colleagues.

Using these sources, the book provides insights into a many-sided character - telling the story of how Hughes and his immediate forebears embraced more of their English than their Irish heritage while becoming distinctively Australian. It also offers a personal perspective on several decades of Australian political, social and legal history.

Contents:
Preface
Abbreviations
Hughes Family Tree
1. The inheritance
2. Childhood and education
3. ‘It’s great flying all day, morning and afternoon’
4. ‘A relatively lucky and safe war’
5. ‘A mixture of frustration and hope . . . followed by disappointment’
6. ‘With optimism as one’s guiding star’
7. ‘Right out of national security central casting’
8. ‘I felt as if I was walking a tight-rope’
9. An ‘insider’ and an ‘outsider’
10. ‘The Queen’s Agent administering the law for her’
11. Public order: ‘exercising caution, moderation and restraint’
12. Testing the extent of Commonwealth power
13. ‘You change the course with no regrets for the past’
14. President of the NSW Bar Association
15. ‘The best of times’ and ‘the worst of times’
16. The Robinson Royal Commission
17. ‘From silk to riches’
18. Two ‘happy & auspicious’ events
19. An ‘exquisitely difficult case’ and a ‘difficult’ client
20. Four defamation cases
21. ‘The venerable lion of the Sydney bar’
22. ‘I am still enjoying practice’
23. ‘The profession has every reason to be grateful to you’
Chapter Notes
Select Bibliography
Index