The Rule of Law Under Fire? 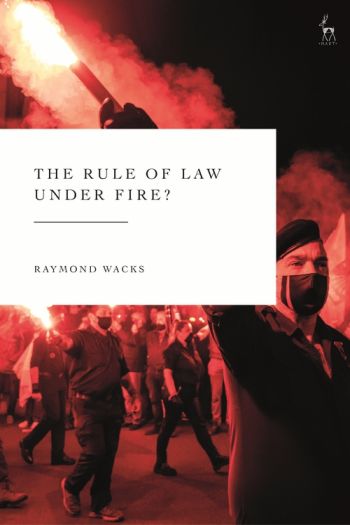 Does the rise of populism, authoritarianism, and nationalism threaten the welfare of the rule of law? Is this fundamental democratic ideal under siege?

In this timely and important book, Raymond Wacks examines the philosophical roots of the rule of law and its modern, often contentious, interpretation. He then investigates 16 potential ideological, economic, legal, and institutional dangers to the rule of law. They range from the exercise of judicial and administrative discretion and parliamentary sovereignty, to the growth of globalisation, the 'war on terror', and the disquieting power of Big Tech. He also considers the enactment and enforcement in several countries of Draconian measures to curtail the spread of COVID-19, which has generated fears that these emergency powers may outlive the pandemic and become a permanent feature of the legal landscape, thereby impairing the rule of law.

Wacks identifies which issues among this extensive array pose genuine risks to the rule of law, and suggests how they might be confronted to ensure its defence and preservation.

Raymond Wacks is Emeritus Professor of Law and Legal Theory at the University of Hong Kong. He is the author of 15 books, several of which have been translated into more than a dozen languages on legal philosophy, privacy, and justice. He is also the co-author of 5 books, and editor of 10. His most recent publications (with Andrea Monti) include Protecting Personal Information: The Right to Privacy Reconsidered (Hart Publishing, 2019), and COVID-19 and Public Policy in the Digital Age (2020). The sixth edition of his Understanding Jurisprudence: An Introduction to Legal Theory was published in 2020.