A Legal History for Australia 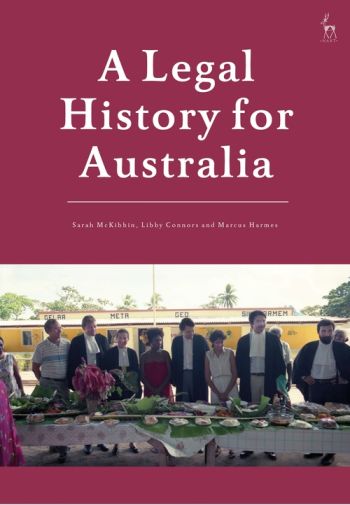 This is a contemporary legal history book for Australian law students, written in an engaging style and rich with learning features and illustrations. The writers are a unique combination of talents, bringing together their fields of research and teaching in Australian history, British constitutional history and modern Australian law.

The first part provides the social and political contexts for legal history in medieval and early modern England and America, explaining the English law which came to Australia in 1788. This includes:

The second part examines the development of the law in Australia to the present day, including:

The comprehensive coverage of several centuries is balanced by a dynamic writing style and tools to guide the student through each chapter including learning outcomes, chapter outlines and discussion points. The historical analysis is brought to life by the use of primary documentary evidence such as charters, statutes, medieval source books and Coke's reports, and a series of historical cameos - focused studies of notable people and issues from King Edward I and Edward Coke to Henry Parkes and Eddie Mabo - and constitutional detours addressing topics such as the separation of powers, judicial review and federalism.

A Legal History for Australia is an engaging textbook, cogently written and imaginatively resourced.

Contents:
Introduction
1. The Origins of the Common Law
2. The intellectual life of the law and lawyers from the Middle Ages to Edward Coke
3. The English Revolutions: Parliament, King and Courts in the 17th Century
4. Responsible Government, Law and Justice in 18th-Century England
5. The American Constitutional Settlement
6. Reform of Parliament and Courts in 19th-Century England
7. The Reception of English Law in Australia
8. Self-Government and Law in Colonial Australia
9. Indigenous Australia and the Law in the Colonial Period
10. Federation
11. Australian Constitutional Independence and Law in the 20th Century
12. Indigenous Australia and the Law in Modern Australia
13. Conclusion