The Rule of Law and the Separation of Powers 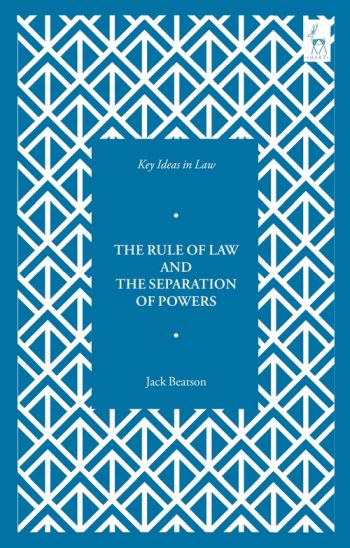 Prompted by the events following the 2016 referendum on EU membership and written during the COVID-19 pandemic by one of the leading public lawyers of our day, this book considers two key constitutional principles, the rule of law and separation of powers, by examining the generality, certainty and predictability of law, relations between the different branches of the state, and the mechanisms of accountability within our democracy.

Since the referendum and in the light of the restrictions imposed to deal with the pandemic, and the use of guidelines presented as rules to do so, attention has refocused on the relationship and respective powers and competences of the three branches of the state, the legislature, the executive, and the judiciary. They have also placed strains on our unwritten constitution that have been unknown in modern times.

The role of the courts and of the rule of law, has been dramatically illustrated by recent litigation, most notably the decisions on whether legislation was needed to serve notice of the UK's intention to leave the EU and whether the prorogation of the Westminster Parliament in 2019 was a matter for the courts as opposed to a political question for government.

Set against this backdrop, the book answers the following questions:

Contents:
Table of Cases
Table of Statutes
Abbreviations
1. Overview
The Rule of Law
The Separation of Powers
The Constitutional Framework
Sources of Law
2. Formal and Substantive Conceptions of the Rule of Law
3. Dicey's Rule of Law and the 20th Century Critiques
4. Accessibility of Law
Publication
Clarity and Intelligibility
Prospectivity, Retrospectivity and Retroactivity
Reasonable Stability
Open Justice
5. Avoiding Arbitrariness
Certainty and Flexibility
Uncertain and Ill-Defined Laws
Constraints on Discretion
Henry VIII Clauses
6. Access to Justice
Access to Courts and Tribunals
Fair Procedures
7. An Independent and Impartial Judiciary
Introduction
Lessons from History
Individual Independence
Institutional Independence
Accountability
External and Internal Challenges and Opportunities
8. The Separation of Powers and the Balance of Responsibilities
The Separation of Powers
Constitutional Statutes
The Balance of Responsibilities
9. Enabling Majorities and Protecting Minorities in Our Democracy
The Right to Vote at Regular Elections
Parliamentary Sovereignty
Parliament's Historical Acquiescence in Common Law Principles
Limitations on the Protection of Minorities
Attempts to Exclude Access to the Ordinary Courts
Judicial Circumspection
Protection of Minorities under the ECHR and the Common Law
Bibliography