Access to Justice in Magistrates' Courts: A Study of Defendant Marginalisation 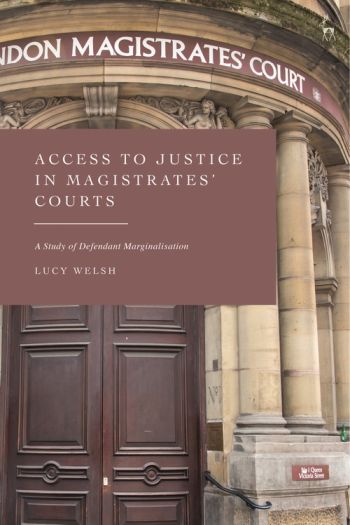 This book examines access to justice in summary criminal proceedings by considering the ability of defendants to play an active and effective role in the process.

'Access to justice' refers to the ability of defendants to understand and effectively participate in summary criminal proceedings, because it is a vital principle of justice that “justice should not only be done, but should manifestly and undoubtedly be seen to be done” by all participants in the process.

The book is based on socio-legal research. The study is ethnographic, based on observation conducted in four magistrates' courts in South East England and interviews with both defence lawyers and Crown prosecutors. Setting out an argument that defendants have always been marginalised through particular features of magistrates' court proceedings (such as courtroom layout and patterns of behaviour among the professional workgroups in court), the political climate in relation to defendants and access to justice that has persisted since 2010 has further undermined the ability of defendants to play an active role in the process.

Ultimately, this book argues that the government has come to see lawyers as potential drivers of efficiency rather than potential champions of access to justice. That understanding has significant implications for how access to justice in criminal cases in constructed.