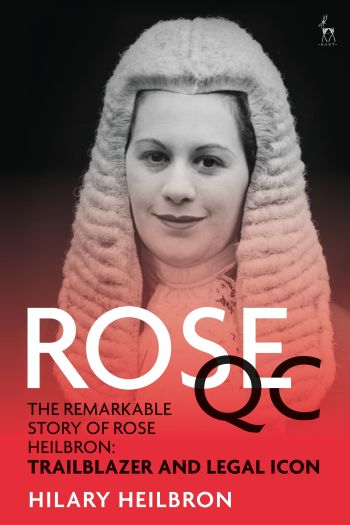 Rose Heilbron QC, (later Dame Rose Heilbron) was an English Barrister, the first woman Queen's Counsel in 1949 and first woman Judge in England in 1956, who became a world famous icon of the 1950's and 1960's.

This biography, written by her daughter Hilary, also a Barrister and Queen's Counsel, charts her rise to prominence and success against the odds, excelling as an advocate and lawyer and later as a High Court Judge. She broke down many barriers and became a pioneer for women at the English Bar and more widely. She also championed many women's causes in an era when it was not fashionable to do so, most of which have since become part of the mainstream.

The biography highlights her role as an inspiring and successful advocate in many famous cases. In 1950, when murder still carried the death penalty and aged only 35, she defended the man accused of a brutal murder in what was to become known as the Cameo case. She later defended Devlin and Burns in another famous murder trial.

She represented the striking Liverpool Dockers in a case of national importance. She achieved an historic victory in an early anti-discrimination case, representing the world renowned cricketer Learie Constantine who had been the victim of race discrimination, and she defended the notorious London gangster, Jack Spot. But there are many other famous and fascinating trials as well as cases of great legal importance related in this biography.

Also chronicled is her tenure as a High Court Judge where she received plaudits for her compassionate approach to cases involving difficult and emotional family and personal issues as well as for her adept and experienced handling of criminal cases, such skills clearly recognized by her appointment by the government in 1975 to chair an Advisory Committee on Rape.

This book tells the story of her many firsts in the legal profession over a career spanning nearly 50 years and of the wide range of other legal and non-legal activities she undertook as a result of her fame. With the added insights and recollections of her daughter it portrays a multi-dimensional picture of the young and beautiful Rose Heilbron - barrister, working wife and mother and later judge - who not only managed to combine these public and private roles in an era when to do so was extremely rare, but who did so with the combination of warmth, flair and determination which was to make her an internationally acclaimed role model for women.

Contents:
Chapter 1 - Childhood
Chapter 2 - Liverpool University and Gray's Inn
Chapter 3 - Becoming a Barrister
Chapter 4 - Developing a Practice at the Bar
Chapter 5 - The End of the War and Marriage
Chapter 6 - Becoming a Mother and Taking Silk
Chapter 7 - The Cameo Murder Trials
Chapter 8 - Adjustment to Motherhood and in Demand as a Speaker
Chapter 9 - Getting into her Stride in Silk
Chapter 10 - Welcome and Unwelcome Publicity and Another Famous Murder Trial
Chapter 11 - A Series of High-Profile Cases
Chapter 12 - Rose Cements Her Reputation
Chapter 13 - A Series of Triumphs-On the Brink of Legal History Once More
Chapter 14 - An Unwitting Public Persona
Chapter 15 - First Woman Judge and a Trip to Benin
Chapter 16 - Premieres, Parades, Parklands and Practice
Chapter 17 - A Flourishing Practice and a Royal Invitation to Lunch
Chapter 18 - Some New Experiences
Chapter 19 - Temporary Disappointments and Long-Term Achievements
Chapter 20 - Another Landmark Case
Chapter 21 - The Last Years at the Bar
Chapter 22 - The Start of Judicial Life
Chapter 23 - The Rape Report and More Honours
Chapter 24 - Settling into Judicial Life
Chapter 25 - The Final Years before Retirement
Chapter 26 - Retirement