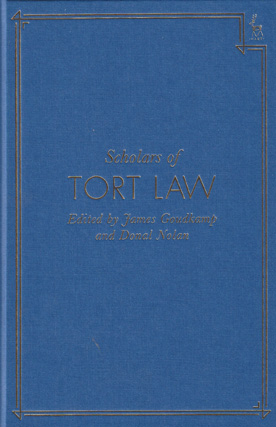 The publication of Scholars of Tort Law marks the beginning of a long overdue rebalancing of private law scholarship. Instead of concentrating on judicial decisions and academic commentary only for what that commentary says about judicial decisions, the book explores the contributions of scholars of tort law in their own right.

The work of a selection of leading scholars of tort law from across the common law world, ranging from Professor Thomas Cooley (1824–1898), Professor Sir Percy Winfield (1878-1953) to Professor Patrick Atiyah (1931–2018), is addressed by eminent current scholars in the field.

The focus of the contributions is on the nature of the work produced by each of the scholars in question, important influences on their work, and the influence which that work in turn had on thinking about tort law. The process of subjecting tort law scholarship to sustained analysis provides new insights into the intellectual development of tort law and reveals the important role played by scholars in that development.

Focusing on the work of influential tort scholars, the book serves to emphasise the importance of legal scholarship to the development of the common law more generally.