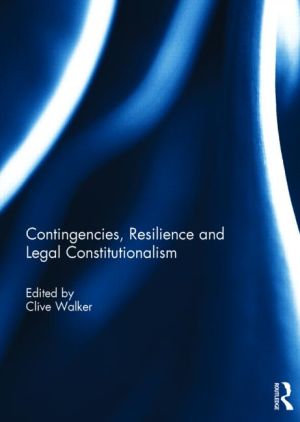 Contingency planning and resilience are of prime importance to the late modern risk society, with implications for law and for governance arrangements. Our risk society continues to seek ever more complex and detailed risk mitigation responses by law, including the UK’s Civil Contingencies Act 2004 and the US Homeland Security Act 2002, which respond to counter-terrorism, natural catastrophes, and other risks.

This book seeks to analyse and criticise the legal developments in contingencies and resilience on a comparative basis, which engages with not only law and constitutionalism but also political theory and policy, including relations between public and private, national and local, and civil and military. Two transcending themes are of interest. One is institutional or structural – what bodies and power relations should we establish in a late modern world where Critical National Infrastructure is mainly held in private hands? The second is dynamic and concerns the grant of powers and arrangements for live responses. Both aspects are subjected to a strong critical stance based in 'constitutionalism', which demands state legitimacy even in extreme situations by the observance of legality, effectiveness, accountability, and individual rights. This book was originally published as a special issue of the International Journal of Human Rights.

Contents:
1. Legal perspectives on contingencies and resilience in an environment of constitutionalism - An overview Clive Walker
2. Lone wolf terrorism in Norway Catherine Appleton
3. Managing ‘civil contingencies’ in Australia Michael Eburn
4. The power to react: review and discussion of Canada’s emergency measures legislation John Lindsay
5. ‘Keep Calm and Carry On’: informing the public under the Civil Contingencies Act 2004 Rebecca Moosavian
6. Emergency powers and the withering of the Royal Prerogative Andrew Blick
7. The governance of emergency arrangements Clive Walker
8. Terrorism and counterterrorism in the US: the question of responsible policy-making John Mueller and Mark G. Stewart
9. Homeland security: definitions and accountability Amos N. Guiora