Migrant Rights at Work: Law's Precariousness at the Intersection of Migration and Labour 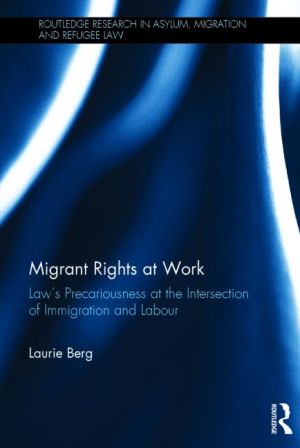 This book examines the ways in which immigration law and enforcement reconfigure the relationships between migrant workers and employers, worsening working conditions by building coercion and uncertainty into them. Public debates about immigration and membership have intensified alongside developed economies' increasing reliance on temporary migrant workers. International Labour Organisation protections for migrant workers, regarded as among 'best practice' safeguards for social rights, enjoy little ratification by either sending or receiving countries. Not a single western state has become party to the United Nations International Convention on the Protections of the Rights of All Migrant Workers and their Families. A decade of regulatory reforms targeting migrant worker exploitation in Australia forms the core case-study through which these concerns are traced, as issues common to migrant worker schemes internationally have arisen in Australia comparatively recently.

Through its focus on the Australian example, the book demonstrates that myriad mechanisms are productive of precariousness, most of which are endemic to immigration controls across Europe and North America. In presenting an analytical approach to issues of temporary labour migration, the book develops a unique theoretical framework, contending that the concept of precariousness, rather than equality or vulnerability, is the most fruitful way to evaluate and ultimately solve problems of temporary migrant labour. This book will be of great interest to scholars and practitioners of immigration and employment law and policy.