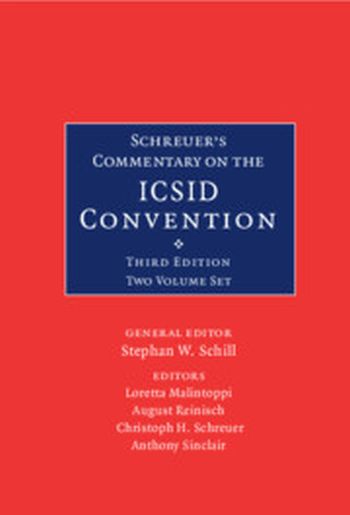 This unique compendium offers an article-by-article commentary on the Convention on the Settlement of Investment Disputes between States and Nationals of Other States. Providing a comprehensive explanation of the functioning of this important mechanism for the settlement of investor-State disputes, it incorporates the preparatory work, the Convention's text, various rules and regulations adopted under the Convention, the practice of arbitral tribunals under the Convention, and academic writings on the subject.

The first and second editions of this Commentary have been relied upon by numerous arbitral tribunals. This third edition follows the same system and approach, but extensive updates and revisions reflect the vast increase in arbitral practice since the publication of the second edition. A number of novel issues that have emerged through this practice are now addressed, making this practice-oriented guide an indispensable tool for anyone dealing with the ICSID Convention. Likewise, the number of contributors to and editors of the third edition has increased.