Is Eating People Wrong?: Great Legal Cases and How they Shaped the World 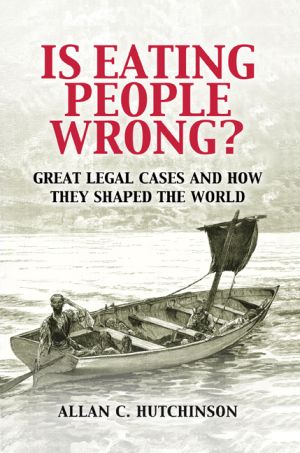 Great cases are those judicial decisions around which the common law develops. This book explores eight exemplary cases from the United Kingdom, the United States, and Australia that show the law as a living, breathing, and down-the-street experience. It explores the social circumstances in which the cases arose and the ordinary people whose stories influenced and shaped the law as well as the characters and institutions (lawyers, judges, and courts) that did much of the heavy lifting. By examining the consequences and fallout of these decisions, the book depicts the common law as an experimental, dynamic, messy, productive, tantalizing, and bottom-up process, thereby revealing the diverse and uncoordinated attempts by the courts to adapt the law to changing conditions and shifting demands. Great cases are one way to glimpse the workings of the common law as an untidy, but stimulating exercise in human judgment and social accomplishment.

Contents:
1. In praise of great cases – the big, the bad and the goodly
2. Is eating people wrong? – the law and lore of the sea
3. Bearing witness – in support of the rule of law
4. In the hunt – power, property, and possession
5. Shades of brown – a constitutional catharsis
6. A snail in a bottle – nature, neighbours, and negligence
7. An aboriginal title – the lie and law of the land
8. Grinding at the mill – putting limits on agreements
9. Of crimes and cautions – the rights and rites of investigation
10. Coming up for air – the common law at 2010.