The Science of Proof: Forensic Medicine in Modern France 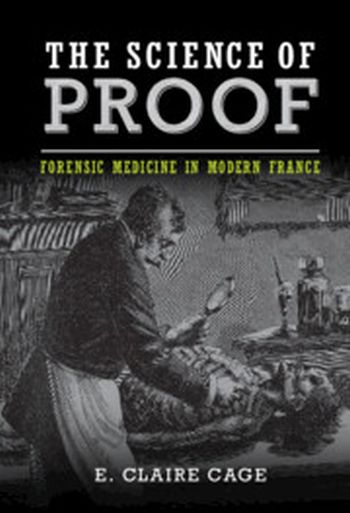 The Science of Proof traces the rise of forensic medicine in late eighteenth- and nineteenth-century France and examines its implications for our understanding of expert authority. Tying real life cases to broader debates, the book analyzes how new forms of medical and scientific knowledge, many of which were pioneered in France, were contested, but ultimately accepted, and applied to legal problems and the administration of justice. The growing authority of medical experts in the French legal arena was nonetheless subject to sharp criticism and scepticism. The professional development of medicolegal expertise and its influence in criminal courts sparked debates about the extent to which it could reveal truth, furnish legal proof, and serve justice.

Drawing on a wide base of archival and printed sources, Claire Cage reveals tensions between uncertainty about the reliability of forensic evidence and a new confidence in the power of scientific inquiry to establish guilt, innocence, and legal responsibility.

Contents:
Introduction
1. The science of death
2. Poisoning and the problem of proof
3. Deception and detection
4. Reproductive bodies and crimes
5. The forensics of sexual crimes against children
Conclusion and Epilogue.

Nothing More than Freedom: The Failure of Abolition in American Law
Giuliana Perrone
ISBN 9781009219198
To be published April 2023
Cambridge University Press
£47.99