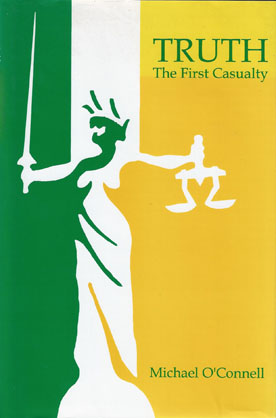 It has become apparent to most people that evidence submitted at trial is all too often not only unreliable but actually falsified. It seems that the authorities involved have been more concerned with a conviction than with justice.

In the event of a wrongful "guilty" verdict the accused can appeal and the case can be tried again. However, when a person has been found at trial to be innocent they cannot be retried. lf the initial evidence was wrong, there is no recourse to justice for the victims of the crime. The law systems of Ireland and England are considered some of the fairest in the world. But are they?

Over the past twenty years there have been cases in both jurisdictions where allegations of police brutality, fabricated evidence and forced confessions have repeatedly been made. In that time, miscarriages of justice have occurred with an increasing frequency. Some have been rectified and the innocent set free. In others the injustice continues.

However, there is another side of the coin. The families of the murdered victims cannot demand a retrial and will never see justice done. This poses the major thrust of questioning of the law as it exists. O'Connell examines the case of Bloody Sunday, on 30 January 1972, in detail and how the inquiry conducted by Lord Chief Justice, Lord Widgery and his report published three months later was nothing short of a calculated whitewash.

The cases of the Maguire Seven and the Guildford Four have been well publicised at the time of their release from prison. Even after the quashing of their convictions, there has been a whispering campaign by some of the legal establishment who maintain their guilt. O'Connell sets out to show that the lives of eleven innocent people were blighted by perjured prosecution evidence.

The next case to be examined is the Hackney Arms Trial, exposing the unlawful activities of Special Branch in the 1970s and '80s. In the case of Edward Manning Brophy, there is a legal analysis of his trial for terrorist activities where he confessed, freely and openly to membership of the IRA. The House of Lords ruled that his conviction could not stand and he was set free.

The worst of all casualties, and the cases that should stir the consciences of people who stay silent in the face of injustice, were the assassination of two children by the British Army - Majella O'Hare and John Boyle. Efforts were made to conceal the circumstances of the deaths by outright lies by the Army. The three-year sentence given to fifteen-year old Stephen McCaul will certainly cause readers to pause to think about the attitude of society to criminal conduct and investigation and to reflect on the legal system in Northern Ireland.

Finally, O'Connell exposes the horrendous killing of two unarmed men - Seamus Grew and Roderick Carroll - by members of the security forces in County Armagh in December 1982. The author sets out to show that members of the RUC (Royal Ulster Constabulary) provided false or misleading information to members of the Criminal Investigation Branch.

The worst aspect of it all is the lack of morality that prevails, as the occupiers of the high moral ground in a fight for principles of law and order against terrorism indulge in the dissembling of truth and the purveying of false information.