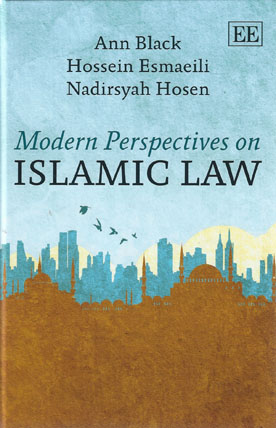 This well-informed book explains, reflects on and analyses Islamic law, not only in the classical legal tradition of Shari'a, but also its modern, contemporary context. The book explores the role for Islamic law in secular Western nations and reflects on the legal system of Islam in its classical context as applied in its traditional homeland of the Middle East and also in South East Asia.

Written by three leading scholars from three different backgrounds: a Muslim in the Sunni tradition, a Muslim in the Shia tradition, and a non-Muslim woman - the book is not only unique, but also enriched by differing insights into Islamic law. Sir William Blair provides the foreword to book which acknowledges that Islam continues to play a vital role not just in the Middle East but across the wider world, the discussion on which the authors embark is a crucial one.

The book starts with an analysis of the nature of Islamic law, its concepts, meaning and sources, as well as its development in different stages of Islamic history. This is followed by accounts of how Islamic law is being practised today. Key modern institutions are discussed, such as the parliament, judiciary, dar al-ifta, political parties, and other important organisations. It continues by analysing some key concepts in our modern times: nation state, citizenship, ummah, dhimmah (recognition of the status of certain non-Muslims in Islamic states), and the rule of law.

The book investigates how in recent times, more and more fatwas are issued collectively rather than emanating from an individual scholar. The authors then evaluate how Islamic law deals with family matters, economics, crime, property and alternative dispute resolution. Lastly, the book revisits certain contemporary issues of debate in Islamic law such as burqa, halal food, riba (interest) and apostasy.

Modern Perspectives on Islamic Law will become a standard scholarly text on Islamic law. Its wide-ranging coverage will appeal to researchers and students of Islamic law, or Islamic studies in general. Legal Practitioners will also be interested in the comparative aspects of Islamic law presented in this book.