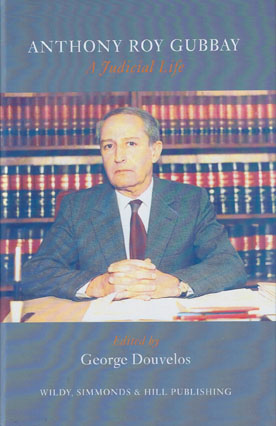 Chief Justice Gubbay was appointed as Chief Justice of Zimbabwe by Robert Mugabe in 1990 but then forced to retire in 2001.

In this book, George Douvelos has collected tributes from some of Chief Justice Gubbay’s many admirers, together with a number of papers and addressed delivered by the judge himself, to present a graphic portrayal of what can happen when the Rule of Law is ignored, and judges are subjected to a variety of pressures by political forces to achieve political ends.

What emerges is the story of one courageous man who remained faithful throughout to the Rule of Law, and steadfast in protecting judicial independence, in the face of enormous challenges.

Chief Justice Gubbay’s life, and his example, should serve as an inspiration to all who value freedom, justice and democracy.

Contents:
The Honourable Anthony Roy Gubbay: A Judicial Biography
George Douvelos;
Anthony Gubbay: Former Chief Justice of Zimbabwe
The Hon Justice Johann Kriegler;
A Tribute from an Admirer and Friend
The Hon Madam Justice Claire L’Heureux-Dude;
Just, Bold, Creative: The Judicial Life of Tony Gubbay; (Encounters with the Zimbabwean Judiciary)
The Hon Michael Kirby;
A Tribute to One of Zimbabwe’s Great Legal Luminaries
The Hon Ahamed Ebrahim;
A Personal Tribute to Chief Justice Gubbay
The Hon Cynthia A Baldwin;
Wicked Things Done: Law and Land Seizure in Zimbabwe
Jeremy Gauntlett;
To the Honourable Tony Gubbay on the Occasion of His Address to the Society of Zimbabwean Lawyers
The Hon Mr Justice C N Greenland
The Hon Anthony Roy Gubbay’s Select Papers
I.Independence of the Judiciary and Judicial Accountability: The Latimer House Guidelines
II.Independence, Ethics and Accountability of the Judiciary
III.The Opening of the Legal Year in the High Court
IV.The Challenge to Judicial Independence: The Zimbabwe Situation
V.Address Delivered at the University of the Witwatersrand on being Conferred A Honourary Doctor of Laws
VI.Speech Delivered at the South Eastern Circuit Dinner at Lincoln’s Inn
VII.The Progressive Erosion of the Rule of Law in Independent Zimbabwe Third International Rule of Law Lecture;