Lord Mansfield: Justice in the Age of Reason 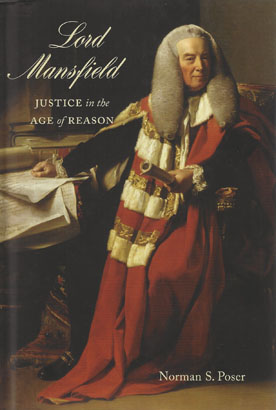 In the first modern biography of Lord Mansfield (1705-1793), Norman Poser details the turbulent political life of eighteenth-century Britain's most powerful judge, serving as chief justice for an unprecedented thirty-two years.

His legal decisions launched England on the path to abolishing slavery and the slave trade, modernized commercial law in ways that helped establish Britain as the world's leading industrial and trading nation, and his vigorous opposition to the American colonists stoked Revolutionary fires.

Although his father and brother were Jacobite rebels loyal to the deposed King James II, Mansfield was able to rise through English society to become a member of its ruling aristocracy and a confidential advisor to two kings. Poser sets Mansfield's rulings in historical context while delving into Mansfield's circle, which included poets (Alexander Pope described him as "his country's pride"), artists, actors, clergymen, noblemen and women, and politicians.

Still celebrated for his application of common sense and moral values to the formal and complicated English common law system, Mansfield brought a practical and humanistic approach to the law. His decisions continue to influence the legal systems of Canada, Britain, and the United States to an extent unmatched by any judge of the past.

An illuminating account of one of the greatest legal minds, Lord Mansfield presents a vibrant look at Britain's Age of Reason through one of its central figures.

Contents:
Part One: Becoming Lord Mansfield
1.
Scotland
2.
Westminster and Oxford
3.
Lincoln’s Inn
4.
A Rising Lawyer
5.
Entering Politics
6.
Law Officer of the Crown
7.
Murray and the Jacobites
8.
Attaining the Bench and the Peerage
9.
The Judge as Politician
10.
Family Affairs
11.
The Social Scene
Part Two: Justice in the Age of Reason
12.
Chief Justice of the Court of King’s Bench
13.
Commerce and Industry
14.
Freedom of the Press
15.
Crime and Punishment
16.
Betting and Lending
17.
Slavery and the Somerset Case
18.
The American Revolution
19.
Protecting Authors and Inventors
20.
Women and Marriage
21.
Religious Freedom
22.
The Gordon Riots
23.
Last Years
Epilogue: Lord Mansfield’s Legacy
Acknowledgments
Notes
Bibliography
Index ;