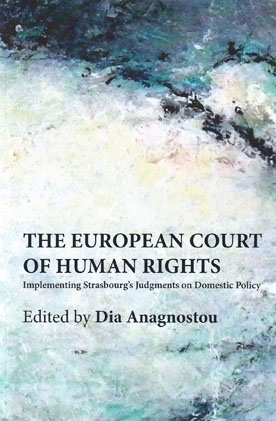 Since the turn of the millennium, the European Court of Human Rights has been the transnational setting for a European-wide ‘rights revolution’. One of the most remarkable characteristics of the European Convention of Human Rights and its highly acclaimed judicial tribunal in Strasbourg is the extensive obligations of the contracting states to give observable effect to its judgments.

Dia Anagnostou explores the domestic execution of the European Court of Human Rights’ judgments and dissects the variable patterns of implementation within and across states. She relates how marginalised individuals, civil society and minority actors strategically take recourse in the Strasbourg Court to challenge state laws, policies and practices. These bottom-up dynamics influencing the domestic implementation of human rights have been little explored in the scholarly literature until now.

By adopting an inter-disciplinary perspective, Anagnostou goes beyond the existing studies - mainly legal and descriptive - and contributes to the flourishing scholarship on human rights, courts and legal processes, and their consequences for national politics.