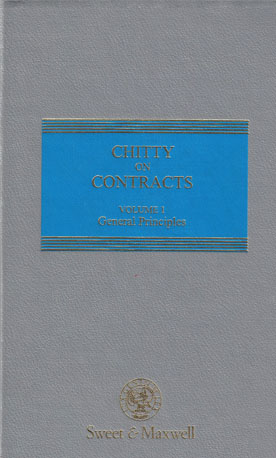 The undisputed heavyweight of contract law, Chitty on Contracts, is back for its 28th edition. Since it was first published in 1826, this core title has grown in stature and authority with every new edition. Its two volumes provide unrivalled expertise for common law and commercial barristers and solicitors as well as academics and the judiciary in many countries across the world.

Chitty's clear written style ensures it can be read and understood by practitioners at all levels of expertise within contract law. Interpretation and explanatory narrative are supported by examples of case law and legislation.

Volume I covers General Principles whilst Volume II deals with Specific Contracts. All the new major developments in case law and legislation since the 27th edition in 1994 have been incorporated into this issue. In addition, full reference has been made to the new 'Woolf' Civil Procedure Rules and the new terminology arising has been used where relevant.

Of particular note is the inclusion of new legislation such as: Arbitration Act 1996 Competition Act 1998 Sale of Goods Act Railways Act 1993 A wide range of case law affecting Commonwealth jurisdictions. Highly respected work amongst practitioners as well as academics and the judiciary. Full references to new Civil Procedure Rules where relevant.