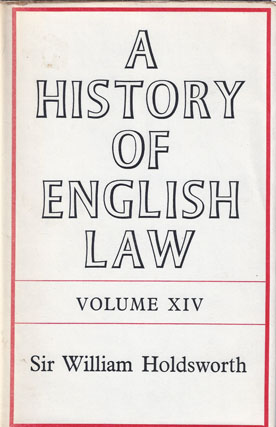 The dust jacket image shown is of the 1966 reprint. The current edition has no dustjacket.

Sir William Searle Holdsworth was professor of constitutional law at University College, London (1903–8). After 1922 he was Vinerian professor of English law at Oxford. Holdsworth's greatest achievement is his History of English Law in 17 Volumes.

Covering English legal history from the Anglo-Saxons to the 19th-century Judicature Acts Sir William Holdsworth's monumental history was interrupted in 1945 at Volume 12 by the author's death.

Suceeding volumes, first based on Holdsworth's typescript and later, with much more labour, on manuscript notes, have been edited by Professors A. L. Goodhart and H. G. Hanbury.

Volume 14 continues Book V Part I: The Centuries of Settlement and Reform and forms the beginning of Chapter V which covers the period from the Reform Act, 1832 to the Acts of 1873-1875. This volume is of particular interest to the historian as well as to the lawyer. Holdsworth's review, in the introduction, of the interactions between Peel and Melbourne and later Disraeli and Gladstone,is full of political insight.

His survey of the powers of Parliament, the Cabinet, the Courts, and local Government, illustrated by reference to events in the period under discussion and followed by a wide ranging survey of the constitutions and of the status of the emerging Commonwealth in this period, is invaluable.

For the lawyer this volume carries one stage further Holdsworth's unique contribution to the task of recording the development of the English legal system and analysing this for teaching, reference and research.

Volume 14 contains Holdsworth's exposition of the entire field of public law from Bentham and the increasing importance of central Government through the residual powers of the Crown to a study of the growth and evolution of statutory powers of the executive.