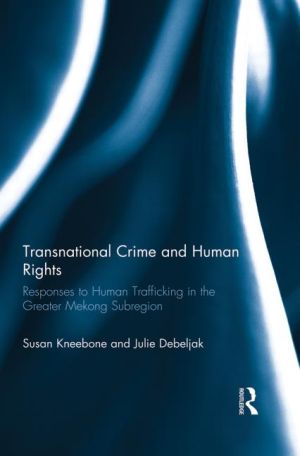 Despite the international community’s attempts to offer a coordinated response to the issue of ‘human trafficking’ in the twenty first century, there are indications that the trafficking is actually on the increase, and is a growing part of the global economy.

This book offers an evaluation of responses to the transnational crime of human trafficking and governance of the issue through a case study of the Greater Mekong Subregion (GMS) which comprises Cambodia, the People's Republic of China, Lao People's Democratic Republic, Myanmar, Thailand, and Vietnam. It analyses the international and national legal and policy frameworks and the role of governments, international and national non-governmental institutions, and regional processes, in responding to trafficking issues in the GMS. The book is based on the findings of a three year study conducted in the region, involving interviews with more than sixty individuals from relevant organizations and agencies, and examines the social, political and historical factors, including gender and age, labour exploitation and migration which are background to human trafficking issues in the GMS. The book does not just consider sex trafficking but also looks at labour trafficking and other forms of trafficking such as ‘forced’ marriages and false adoptions.

Contents:
Part 1: Background
1. The Region and Anti-Trafficking Responses
2. The International Framework: The Trafficking Protocol and Human Rights
Part 2: Anti-Trafficking Responses within the GMS
3. Processes within the Region and Implementation of the CTOC Framework
4. Prevention, Prosecution and Protection in the GMS
Part 3: Evaluation – Discourses, Mandates and Protection Gaps
5. Human Rights, Gender and Migration
6. Gaps in Protection: The Forgotten Ones
7. Lessons for the Globe