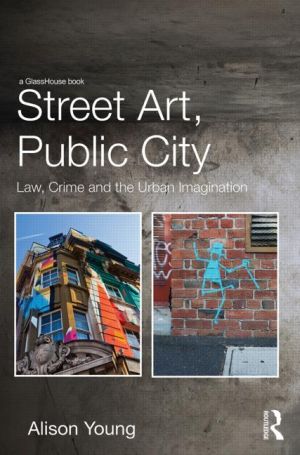 Crime and the Urban Imagination investigates the practices of street art and graffiti as cultural practices at the borders of legality and illegality. Street art has become a highly significant part of the ways in which people shape their urban surroundings. Cities are engaged in a continual process of cultural production through which their self-image is developed and refined. Sometimes this cultural production is legal - such as architecture, statuary, signage, advertising, and public art; sometimes, it is not - in practices such as billposting, graffiti and street art. For the people who live in or visit the city, the cultural activities contributing to a city's identity are sometimes unremarkable or even imperceptible; but at other times, they can become contested, subject to planning disputes, legal intervention, and shifts in public opinion.

Street art is one cultural practice that generates discussion and even dispute about what can be included in the public image of the city. It is an art form that exists on the boundary between the legal and the illegal, and that can polarise public opinion. Some cities regard it as criminal and seek to prosecute artists; other cities have embraced its potential to contribute to gentrification. Many street artists have found considerable success within the mainstream art world, and must negotiate the tensions between producing art for the street and the demands of the art market. As such, street art is a cultural practice with the capacity to inform us about the nature of urban life, about the limits of public space, and about the borders between art, crime and culture.

Crime and the Urban Imagination investigates these borders. Based upon fifteen years of research it examines the ways in which street art has become as integral part of cities' cultural identities. It will be of interest to readers in the fields of street art and graffiti specifically, but also to those interested in issues to do with cities and urban space, legal geography, cultural criminology as well as cultural studies and art more generally.