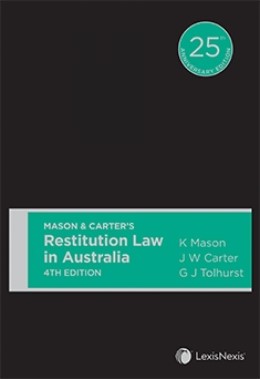 Restitution is one of the law’s few remaining commons, largely untouched by statute. Fifty years ago restitution was a wilderness, an apparent ‘miscellany of disparate categories’ through which litigant, judge and student trudged holding a compass marked ‘implied contract’ at its four points. The landscape of the modern Australian law of restitution, however, is complex. The topic of restitution addressed by the authors includes doctrines responding to different policies as well as gain-based remedies appurtenant to wrongs with their juridical source outside unjust enrichment, which is only one of the bases for restitution.

The fourth edition has been fully revised and updated and some chapters rewritten. There is extensive reference to Mann v Paterson Constructions Pty Ltd (2019), a High Court decision welcomed as to its outcome and its reversal of decisions criticised in earlier editions. The unorthodox and confusing reasoning of the justices, and the dangers posed to the coherent structure of restitution law, are also discussed.

This authoritative analysis of the law of restitution is essential reading for members of the judiciary, barristers and solicitors, as well as students of commercial law, equity and remedies.