The Trials of Justice Murphy 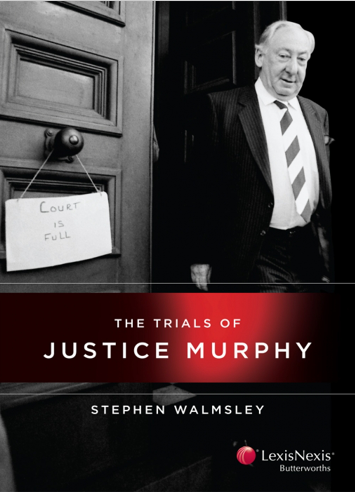 October 2016 marks thirty years since the death of former High Court Justice Lionel Murphy, a controversial legal and political figure who despite his many achievements is perhaps best known for being charged with attempting to pervert the course of justice.

The book takes an in-depth look at the unique story of how Murphy, a High Court judge at that time, was charged with serious criminal offences, found guilty of one and subsequently sentenced to imprisonment.

The book examines the first trial in depth, turning then to the appeal and second trial, at which Murphy was acquitted. Facing a further inquiry, Murphy was diagnosed with a terminal illness, but controversially returned to sit as a judge, delivering his last judgments just an hour before he died.

Follow the fascinating story of how it came about that one of Australia’s most senior judges was once accused of putting his freedom, and the reputation of the High Court, in jeopardy to help a friend.

Contents:
1. Background to the Story
2. The Main Crown Witness: Clarrie Briese, the Lutheran from Trungley
3. Morgan Ryan’s Dinner Party: Briese Meets Murphy
4. The Age Tapes: Allegations Against a Judge
5. A Senate Inquiry
6. An Allegation Against Another Judge
7. The Pope’s Jockey Saddles Up
8. A Second Senate inquiry
9. Murphy is Charged
10. The Committal Hearing
11. A High Court Judge is Committed for Trial
12. The Trial: Part 1 — The Beginning
13. The Trial: Part 2 — The Crown Case
14. The Trial: Part 3 — The Defence Case
15. The Trial: Part 4 — Character Witnesses
16. The Trial: Part 5 — Addresses and Summing Up
17. The Verdicts
18. The Public Discusses the Verdicts
19. Some Press Observations on the Trial
20. The Jurors Respond to Critics
21. Jury Disclosures Become Part of the Case
22. An Interlude: The Law About Jury Disclosures
23. Murphy Becomes a High Court Litigant
24. The Sentencing Hearing
25. A High Court Judge is Sentenced to Imprisonment
26. The Foord Trial
27. Murphy’s Appeal
28. Murphy is Granted a Retrial
29. Murphy’s Second Trial
30. The Final Verdict and its Aftermath
31. Murphy’s Dock Statement Has Other Repercussions
32. A New Inquiry
33. Murphy’s Last Judgments and His Death
Appendix 1: Chronology of events
Appendix 2: 'Proved misbehaviour': Section 72 (ii) of the Constitution
Appendix 3: The McClelland ‘perjury’ confessions