EU Private Law and the CISG: The Effects for National Law 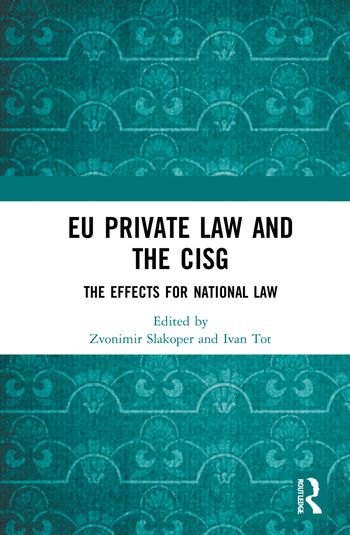 EU Private Law and the CISG examines selected EU directives in the field of private law and their effects on the national private law systems of several EU Member States and discusses certain specific concepts of the United Nations Convention on Contracts for the International Sale of Goods (CISG) in light of the CISG’s recent fortieth anniversary.

The most prominent influence of EU law on national private law systems is in the area of the law of obligations, thus the book focuses on several EU private law directives that cover the issues belonging to contract and tort law, as interpreted in the case law of the Court of Justice of the EU. EU private law concepts need to be interpreted autonomously and uniformly rather than through the lens of national private law systems. The same is true for the CISG which has not only been one of the most successful instruments of the international trade law unification but had also influenced both the EU private law and domestic laws. In Part I, focused on the EU private law and its effects for national laws, chapters examine the recent Digital Content and Services Directive and its likely impact on the contract law of the UK and Ireland, the role aggressive commercial practices play in EU banking and credit legislation, the applicability of the EU private international law rules to collective redress, the unfair contract terms regime of the Late Payment Directive and its transposition into Croatian law, the implementation of the Commercial Agency Directive in Denmark, Estonia and Germany, and disgorgement of profits as remedy provided in the Trade Secrets Directive. In Part II, dealing with selected CISG issues, chapters discuss the autonomous interpretation of CISG’s concept of sale by auction and its notion of intellectual property, as well as the CISG’s principle of freedom of form and the possibility for reservations with the effect of its exclusion.

The book will be of interest to legal scholars in the field of EU private law and international trade law, as well as to the students, practitioners, members of law reform bodies, and civil servants in Europe, and beyond.