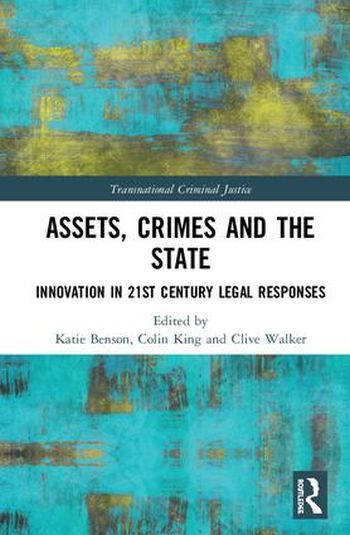 Organised crime, corruption, and terrorism are considered to pose significant and unrelenting threats to the integrity, security, and stability of contemporary societies. Alongside traditional criminal enforcement responses, strategies focused on following the money trail of such crimes have become increasingly prevalent. These strategies include anti-money laundering measures to prevent ‘dirty money’ from infiltrating the legitimate economy, proceeds of crime powers to target the accumulated assets derived from crime, and counter-terrorist financing measures to prevent ‘clean’ money from being used for terrorist purposes.

This collection brings together 17 emerging researchers in the fields of anti-money laundering, proceeds of crime, counter-terrorist financing and corruption to offer critical analyses of contemporary anti-assets strategies and state responses to a range of financial crimes. The chapters focus on innovative anti-financial crime measures and assemblages of governance that have become a feature of late modernity and on the ways in which individual nation states have responded to anti-money laundering and counter-terrorist financing requirements in light of their specific social, political, and economic contexts. This collection draws on perspectives from law, criminology, sociology, politics, and other disciplines. It adopts a much-needed international approach, focusing not only on expected jurisdictions, such as the United States and United Kingdom, but also on analysis from countries such as Qatar, Kuwait, Iran, and Nigeria. The authors stand out for their fresh and original research, which places them at the cutting edge of the subject.

This book provides a comprehensive, insightful, and original study of an important and developing field for academics, students, practitioners, and policymakers in multiple jurisdictions.

Contents:
Dirty Money and the New Responses of the 21st Century
Katie Benson, Colin King and Clive Walker
PART I: INNOVATIVE TECHNIQUES AND NEW PERSPECTIVES ON EXISTING TECHNIQUES
Too Much Information? Evaluating the Financial Intelligence Gathering Provisions of the Fourth European Union Anti-Money Laundering Directive and the Common Reporting Standard in Combatting Tax Evasion
Sam Bourton
Cooperation Between Financial Intelligence Units in the EU: Challenges for the Rights to Privacy and Data Protection
Foivi Sofia Mouzakiti
Risk-Based Approach: Is it the Answer to Effective Anti-Money Laundering Compliance?
Gauri Sinha
Unexplained Wealth Orders: an Evolving Approach to Enhancing the Effectiveness of the Anti-Money Laundering Regime in the United Kingdom
Sirajo Yakubu
Social Value or Social Harm? The Impact of the Proceeds of Crime Act 2002 upon the Defendant and their Families
Craig Fletcher
PART II: INNOVATIVE ASSEMBLAGES OF GOVERNMENT
Legal Professionals as Dirty Money Gatekeepers: the Institutional Problem
Nathaneal Tilahun
Occupation, Organisation and Opportunity: Theorising the Facilitation of Money Laundering as ‘White-Collar Crime’
Katie Benson
New Payment Systems: Potential Counter-Terrorist Financing Risks and the Legal Response in the United Kingdom
Doron Goldbarsht
The Use of Crytpocurrencies in the UK Real Estate Market: an Assessment of Money Laundering Risks
Ilaria Zavoli
Criminal Money and Antiquities: an Open Source Investigation into Transnational Organized Cultural Property Crime
Samuel Andrew Hardy
PART III: COUNTRY-SPECIFIC INSIGHTS OR REBELLION
UK Corporate Corruption: a Regulatory Paradox
Nicholas Mills
Corporate Criminal Liability and the Failure to Prevent Offence: an Argument for the Adoption of an Omissions Based Offence in AML
Steven Montagu-Cairns
The Development of Laws in Kuwait to Combat Corruption: a Work in Progress
Noura T. A. Al-Oumi
Proceeds of Corruption Crime: The Kuwaiti Legal Response
Khaled S.Al-Rashidi
The Suspension of Nigeria from the Egmont Group and its Re-admittance: a Case of Reactive Compliance to Appease the Task Masters?
Olufemi Olaoye
The Qatar Crisis, Legitimacy and the use of Sanctions Against Terrorist Financing
Ahmed Almutawa
Iran Responds: International Counter-Terrorist Financing Framework
Zeynab Malakoutikhah